I haven't posted in a few days, but I have a solid excuse - since last Friday I have been in Greece on a family vacation! After a summer with a lot of new adjustments and some uncertainties to face this fall, it has been a very relaxing trip. I spent two days in Athens, and I'm now on the island of Crete. I wanted to share a few things I've been thinking about as I've been traveling:

The United States Wins at Showers

This isn't always true, but I've noticed some interesting bathroom trends in the few times I've been to Europe. Often, showers do not come with tubs. I don't mean that it's annoying not to be able to take a bath - I mean that there is no tub rim to keep the water from flooding the rest of the bathroom. Bathrooms frequently have drains in the center, but tubs seem to make a little more sense. Also, shower curtains are optional here, which has caused me to soak my clothes or towel on more than one occasion. I like a lot of things about European hostels and hotels, but I do love my American showers. 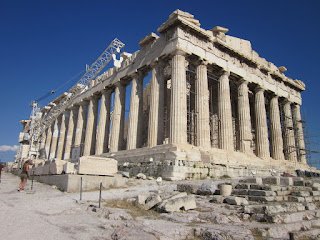 What's that? You made a vase in art class with your bare hands?
Yeah, I guess that's cool, too.

In many European countries, waiters get paid full wages and do not rely on tips. Because they are not pressed to turn over tables to make more tips, servers do not pressure you to leave as soon as you've finished eating. They also do not get frustrated if you only order a coffee, since how much you spend does not affect how much they make in tips. I absolutely love this. It's so easy to spend an afternoon sitting at an outdoor cafe, sipping on a cappuccino or a glass of wine while you read a book or chat with a friend. In the U.S., you can be sure that you will be in and out of a restaurant in under an hour and a half unless you continue ordering course after course. It's nice to have the flexibility to linger.
On a side note, cappuccinos here are served with a sugar packet. I had no idea that people added sugar to them - it turns out I like them a whole lot more than I thought I did. 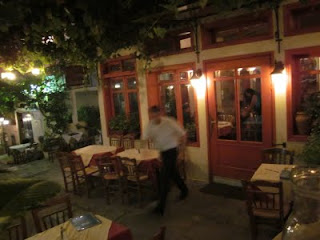 I thought I left Athens and wandered onto a film set.

Especially at hostels, it's easy to meet people from a bunch of other countries and learn interesting things. One thing I always love is listening to accents. A lot of Australians travel around Europe, and the other night I learned that the brand Adidas, which many other Americans and I pronounce "Ah-DEE-dus," is pronounced "AH-dee-DAS" by Australians. Also, they think it's ridiculous that Americans call kebabs (Australian: "key-bab") "kah-bobs". They guy I talked to kept asking, "Where's the 'o' in 'kebab'?" Those were my fun accent facts of the night!

There will be more posts to come with (hopefully) slightly more intelligent commentary. Once I get home and can download my photos, I will definitely add some new ones as well!


Have you traveled recently?
Have you noticed anything funny or unusual or just kind of cool?
Posted by Laura Chanoux at 6:30 PM