What Happened to September?

September has been a really busy month.  A week after I got back from Greece, I started a full-time job, my boyfriend and I searched the city for a new apartment, it was restaurant week, we went to New York for a weekend, my mom was in town, and, well... things just seemed busier.  When I start listing things, it doesn't seem like so much.  To be honest, I have also started watching Mad Men on Netflix and with four seasons to catch up on, relaxing on the couch after work has been beating out writing more often than not.
I have also run into a bit of an issue in that I've had a lot of ideas of what I want to write about, but none of them have been enough for a whole post.  For example, a couple Saturdays ago, I woke up missing the intersection of Main Street and Washington Street in Ann Arbor.  I've written before about how I tend to miss specific locations.  That intersection is one that I always associate with autumn because of my first off-campus adventure to Washington Street that happened over fall break.  If I had tried to write the whole post, it probably would have sounded like a huge sigh and a whine about how much I miss Ann Arbor.  Happily, though, this past week I've gotten to slow down a little and have had time to organize some of my ideas.  Hopefully I can get back to posting at least once a week again!  For now, let me catch you up on something I've been up to lately.

Eating My Way Through Autumn

On Labor Day, my sister and I went apple picking.  It was a perfect way to kick off the fall, but since I had just returned from a summer vacation, the idea of autumn starting so soon made me panic a little.  September?  When did that happen?  However, as we picked Macintosh and Gala apples (as well as peaches, strawberries, pears and a few tomatoes - this orchard was massive!) I started remembering why I often consider the fall my favorite season: the beautiful oranges, reds and yellows of the changing leaves; new books and new classes (though not for me this year); the crisp air that seems like a relief after a humid summer.  As I imagined myself wearing a puffy vest and crunching leaves under my feet, I also realized that much of my love for the fall has to do with food. 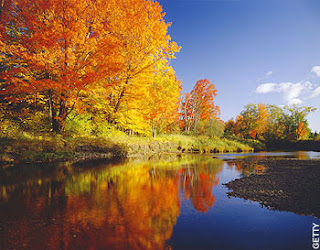 This photo goes along with an article in the UK's Telegraph about "leaf peeping" in New England.
That makes looking at foliage sound like an unusual, shameful act
instead of something that you'd do as you go antiquing in Western Mass.
Read more »
Posted by Laura Chanoux at 9:48 PM 1 comment:

I am back from Greece and I have a lot of pictures.  In an effort to maintain that on-vacation glow, I thought I'd share a few and give you an overview of my trip!  I traveled with my boyfriend's family and we spent sixteen days total on the road/plane/ferry.

After a ten hour flight from Philadelphia, we arrived in Athens, a massive city that houses 1/3 of the entire population of Greece.  We checked into our hostel, Athens Backpackers.  (In addition to normal dorms, they also rent out small studio apartments, which frankly had better kitchens than my house in Ann Arbor.)  We hit the major spots around the city - the Acropolis, the Temple of Zeus, the Plaka, and that really good gyro stand in the Plaka.  I ate some good baklava and delicious souvlaki.  I hadn't tried Greek food very often before a couple years ago, and I'd been missing out.  It's really good and more diverse than I had thought. 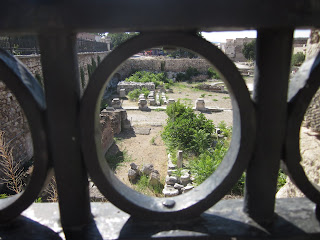 Ruins of an ancient market 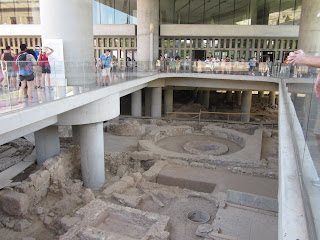 The coolest part of the Acropolis Museum is the actual excavation going on underneath it. 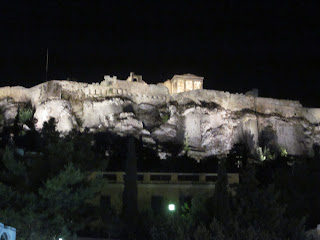 The Parthenon - at night!
Read more »
Posted by Laura Chanoux at 10:36 AM No comments: