This week, I am focusing my series about places that I miss in Ann Arbor on my favorite spots around campus itself.

I did not understand winter until I moved to college. As a New Englander, I thought I had experienced cold weather. We have nor'easters and regularly get multiple feet of snow in the winter. I figured the midwest couldn't throw anything at me that I hadn't seen before. While in some ways this was true - Michigan snowstorms aren't much worse than Massachusetts snowstorms, but winter does seem to last longer - I had not considered what winter is like when you don't have a car. Sure, it was cold waiting for my ride home from high school, but my mom would pick me up and my snow boots barely got wet. If I wanted to visit a friend, I could drive across town and only have to grumble about the time it took for the car to heat up. 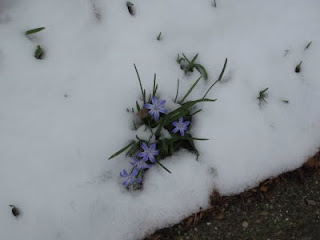 At the University of Michigan, I walked everywhere. My freshman year dorm was up on the Hill, which meant I had at least a fifteen-minute walk to the Diag, longer if I was walking against the wind or if I had to make it to the opposite corner of Angell Hall. Snow boots had a real purpose, especially when I failed at stepping over the slushy puddles that pool at crosswalks. I collected scarves and was thrilled when for Christmas freshman year my mom gave me brand-new long underwear and double-layer mittens. My friends and I had dinner conversations about the merits of wearing leggings under your jeans. It was serious business.

Throughout my four years, I developed certain coping strategies for the winter months. One in particular involved places on campus: shortcuts through well-heated buildings.

When I lived in Couzens Hall, several of my classes were in Angell Hall or Mason Hall, which is on the southwest corner of the Diag. This was a solid fifteen- to twenty-minute walk from my dorm room, and in the cold, it was not especially fun. As the winter blustered away, I learned a few paths through buildings to make my trek a little more pleasant. At least, it was warmer for a minute or two at a time. From Couzens, I took the bridge over Washtenaw Avenue toward Palmer Commons. At the end of the bridge, there's an entrance into the Palmer Commons study area (which has now been turned into the Glass House Café). By cutting through the study rooms, I gave myself at least 45 seconds of warmth. 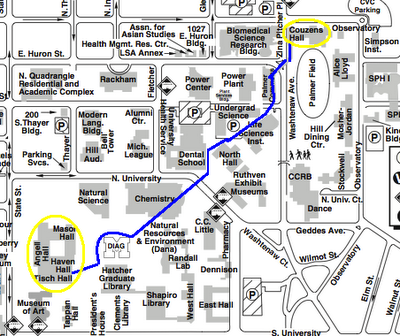 It only seemed right to draw in maize and blue.

From there, I had to brave my way through the wind tunnel created by the Undergraduate Science Building and the Life Sciences Institute. Once I got past the Dental School and crossed North University, I reached my favorite spot: the Chem Building. The Chem Building has a huge atrium that leads directly from North University to the Diag. It was almost a minute and a half to reheat if I walked slowly. From there, I could dash across the Diag (avoiding the M in the center) and make it to class with enough time for my hands to warm up before I had to take notes. I realize these are small things to be excited about, but believe me, as a freshman finding my way around a big campus, they felt like accomplishments. 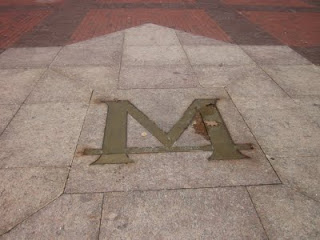 If you step on the M, you will fail your first blue book exam.
I played it safe for all four years and avoided it like my boyfriend avoids a salad.

There were other little tricks here and there - like how the LSA Building has doors on opposite sides that make a direct line between the crosswalk on State Street and the sidewalk down Jefferson, so cutting through was just more efficient - that made me feel like a Michigan insider. I'm sure other students had even better keeping-warm ideas, especially those who lived up on North Campus and had to wait for buses in the cold. In the same way that intersections make me feel at home, being familiar enough with the campus to know shortcuts made me feel much more comfortable in Michigan. Whether I was more comfortable because I was warmer or because I was well-acquainted with my surroundings is hard to say.


Where are your campus shortcuts?
Do you have any favorite routes that might be longer but warmer?
Posted by Laura Chanoux at 11:33 AM