This week I'm focusing my series on places that I miss in Ann Arbor to my favorite spots around campus.

I visited the Michigan Union almost daily, and I always loved walking up to the grand, ivy-covered facade. My friends who visited from other schools often remarked, "That's your union?" It looks as gorgeous and as majestic as the Law Quad. On the front steps, JFK announced his idea for the Peace Corps in 1960, and the building is just as fantastic today as it was then. 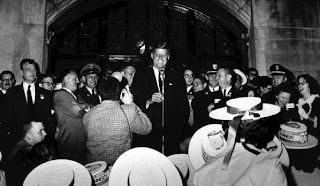 There are many parts of the Union that I love and miss: the Amer's, the phone booths with computers in them, the UAC office on the fourth floor, the circular couches outside the UAC office, the ballroom, and so on. One of my favorite spots in the Union, however, was the Union Tap Room. 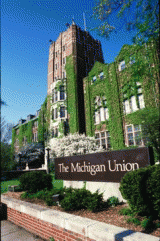 Separated from the underground area with the various fast food places, the Tap Room was one of my favorite places to study. I stopped in there a few times freshman year, and then from sophomore year onward I lived within two blocks of the Union, so the Tap Room became a close work spot where I would be less likely to fall asleep than if I studied on my couch. The Tap Room was a popular spots for my roommates, too, so during finals we would often camp out, take over an entire stretch of tables, and work like crazy until the Union staff kicked us out at 2 AM. We scouted certain tables based on the number of electrical outlets nearby for our laptops, and settled in to write our papers, study for our exams, and share youtube videos when we needed study breaks. With food and coffee conveniently in the same building, it was easy to stay for hours.

It became relatively normal to run into one or more of my roommates at the Tap Room on any given night. We also frequently made plans to meet there and study. On one particular night in December of my junior year, one roommate and I were among very few Tap Room residents of the evening due to a massive snowstorm that had hit the state that day. Despite the inclement weather, we spent a good portion of our "study time" trying to convince another roommate to join us. I'm pretty sure our persuasion tactics revolved around texting the word "snooooooooow" over and over. During finals, somehow that seems like an effective strategy.

By my senior year, I had expanded my studying to other locations, as detailed in my post about writing my thesis. However, the Tap Room remains one of my favorite campus spots, and one that I associate with productivity. Ignoring the youtube video sharing and texting, that is.

Have you ever studied in the Tap Room? Where are your favorite study spots on campus?
And if you're curious about what the Union looked like years ago, before Subway and Panda Express, here's a link to a website about it!
Posted by Laura Chanoux at 10:33 PM