I'm writing from Naxos, a beautiful island in the Cyclades. I haven't seen many Greek islands, but so far Naxos is probably my favorite. It is a big island that has its own economy separate from the tourist trade, so while there are plenty of tourist-oriented shops, tours, and sights, it feels like there's more going on here than just catering to summer visitors. 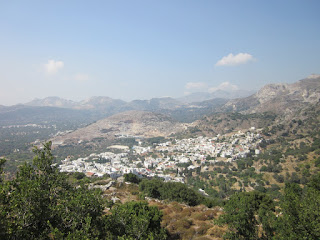 View from an ATV riding around Naxos!

In the other two cities we've visited so far, Athens and Chania, there are very clear tourist areas. The Plaka in Athens is a mix of streets full of shops, restaurants, bars, gyro stands, and occasional ruins. (There is also an incredible baklava place that sells Nutella baklava - oh man, it's good.) Chania's old city has narrow alleys that lead between gorgeous homes and ruins from both the destruction of the Minoan civilization and World War II bombings. In both cities, the history is present and mingled into the everyday landscape. Naxos does have significant history - I'm not sure how many centuries it goes back, but quite a few - but as you wander through the old market and the old city, you easily find yourself stumbling into residential areas, churches that are still in use, and signs that are only in Greek. There are definitely more touristy areas, but they blend quickly into the everyday physical landscape.


Before I left on this trip, I started to read a few books written by travel writers. One was Smile When You're Lying by Chuck Thompson, another was Postcards from Europe by Rick Steves, and the last was Do Travel Writers Go to Hell? by Thomas Kohnstamm. I haven't finished the first two (I enjoy Thompson's writing, but he seems to be using the book as his own personal soap box; Rick Steves is enjoyable as always, but his memoirs had some tough competition next to a couple new mysteries I picked up; Kohnstamm wrote about some terrible decisions and bad situations, but I did appreciate that he acknowledged that they were all his own dumb fault. So far I'd recommend his book above the other two) but I noticed a couple similarities between all three. All the writers expressed some dismay at seeing places they'd written about in guide books or articles become overrun with tourists. However, they also recognized that their duty as travel writers was to explore new places and write about them so more people could visit. They found that as places became popular, they started to lose the charm that made them so wonderful in the first place. Rick Steves told a story about one friend who took him to a popular local beer hall only if Rick promised never to write about it.

Walking around Chania, I could understand why they'd feel that way. Chania is gorgeous. It has a harbor facing towards the sunset that's rimmed with a mix of old and new buildings. Gazing out at the horizon, I marveled at the beauty of the city and the landscape, yet behind me someone was selling Mylar balloons of cartoon characters while another guy tried to hawk rubber tomatoes that flatten when you throw them on the ground. One of the people I'm traveling with commented that the area felt a bit like a carnival. Clearly there are people buying these things, otherwise there wouldn't be anyone selling them, but it seems to distract from the beauty and history of the area itself. I found myself wondering if I'd like the place even more if all the other tourists weren't there. 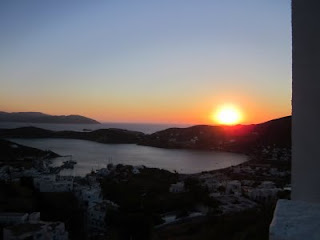 At the same time as I grumble about the lack of authenticity that I find in the tourist trade, I'm still a tourist and I would not have ended up in these cities without the recommendations of friends, family, and travel writers. I'm taking advantage of the hotels and hostels available because the cities have become popular destinations, and I'm certainly taking advantage of the numerous restaurants and gyro stands. I've accepted that no matter what I do, I will look like a tourist - I want pictures of the sunset just like everyone else! - but I can understand why people who consider themselves seasoned travelers hesitate to mention the coolest bars they've discovered. 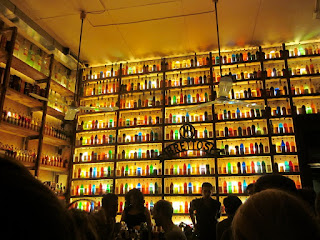 Bar in the Plaka in Athens - worth going just to see all the colors!

To me, traveling seems to be a combination of wanting to see sights - Greek ruins, beautiful locations, the color of the Mediterranean - and wanting to find an authentic piece of culture. As I wander from shop to shop, I've found myself asking if Greek people really do use so many olive oil products or if olive oil is just a convenient tourist export. If I buy olive oil soap to bring home, am I getting a real piece of Greek culture or is it just a prepackaged cultural output for tourists? I think it's definitely possible to find authenticity in places overrun with tourists, but maybe I prefer Naxos because with fewer tourists, that feeling of experiencing authentic culture seems within reach. (Learning Greek might help on that front, though. Maybe that will be my goal for the next trip!)


What do you think about being a tourist? How do you interact with new cultures as you travel? What is your favorite part of traveling?
Posted by Laura Chanoux at 11:51 AM