When I was growing up, I never went to camp. I mean, there was one summer that I spent a week at day camp, where I learned to make bracelets and keychains out of gimp, but I never went to sleepaway camp in the wilds of New Hampshire or Vermont. Many of my friends disappeared for the summer to houses on the Cape or in Maine, and while I did see them occasionally, I often spent my time curled up somewhere with a pile of books. My older brother also played summer league baseball, and for a long time I would bring books to read during his games. (I was not the most supportive little sister.) 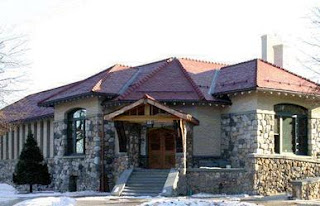 The Lexington Library! (in winter)
So, for today's installment of the summer series, here are some of my favorite summer books from over the years!

The Key to the Treasure and other Liza, Bill and Jed books by Peggy Parish

It has been years since I've read these books, but I loved them because the first couple centered around years-old scavenger hunts that the three main characters had to solve. Each summer, siblings Liza, Bill and Jed stayed with their grandparents and stumbled upon old mysteries. The first book primarily focused on their grandparents' house, but in the rest of the series, they met the other residents of the island. These made perfect summer books partially because they took place in the summer, but also because they were great, innocent adventure books. Even if you're a 20-something college grad reading this, it might be fun to pick one up for an afternoon.

My Side of the Mountain by Jean Craighead George

In this story, the first in a series, a little boy runs away from home, lives in a hollowed-out tree, and generally wins at nature. He lives with a falcon and a weasel and survives a tough winter in the wilderness of upstate New York. After I read this, I'll admit, I absolutely wanted to figure out how to live in a tree in the forest (well, conservation land, so I'm pretty sure it would be illegal) behind my house. Reading this in the summer makes it seem like a more realistic possibility. Leaving my warm, cozy house in the middle of a nor'easter? No thanks. 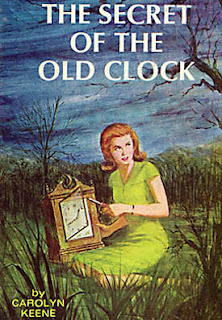 Other favorite series included the Boxcar Children, Nancy Drew, and Encyclopedia Brown. I was really into books about children who solved mysteries, and so I tried to find criminals around my own neighborhood to bust. The old P.I. notebook I used to keep had "clues" like "A truck drove down the street at 100 M.P.H." Not necessarily the most helpful set of evidence ever, and my judgment for speed was not so accurate.

My interest in mysteries has stayed with me, though, and my summer reading during college often consisted of Agatha Christie, Mary Higgins Clark, and cheesy paperback mysteries from the library. After two semesters of serious texts, they made for a relaxing break. Plus, I felt extra smart if I could guess the ending.

What's your favorite summer reading from when you were a kid or more recently?
All she needed was a magnifying glass
and some charm...
Posted by Laura Chanoux at 2:29 PM