Commuting is a recent addition to my summers.

In 2009, I took the bus and the T into Boston for an internship; in 2010, I hopped a bus and a tram in Nantes, France; this summer I'm taking the subway and a trolley in Philadelphia. I've been lucky to have been able to take public transportation, where I can entertain myself without worrying about accidentally rear-ending someone on a highway off-ramp. Sure, often I find myself jammed too close to sweaty businessmen or my feet almost get crushed by an old lady's high heels, but riding public transportation can be unexpectedly fun.

Regular readers of this blog might remember one of my previous commuting stories about crossword puzzles. Another one of my favorite moments that same summer also happened on the T. My sister Becky went down to Philadelphia for a few days to look for a new apartment. She found one she really liked, but when she decided to sign the lease, it had already been taken. She ended up with an apartment way down on her list. (Even thinking about that apartment makes my mom shudder, but somehow Becky survived a year there.)

It seemed like Becky could use a happy surprise, so after work I walked down to Sweet, a cupcake shop a few minutes from where I interned. I picked up a small cupcake for her, which the cupcake girl carefully packed in a box for me. I made my way back to the Green Line T stop and headed home. 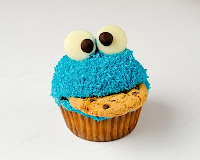 C is also for Cupcake.
(The one I got for Becky did not look like this.)

Somewhere between the Green Line and my transfer to the Red Line, I started to worry that I hadn't been holding the cupcake box perfectly upright. Between trying not to hit anyone with my bag and racing to catch the right Red Line train, I may have jostled the surprise dessert. Once the train started clearing out as we neared the last stop, I peeked inside the box and found that Becky's cupcake had dented frosting, but still looked appetizing.

At this point, a man sitting next to me leaned over. "Is it okay?" he asked.
"Yeah, a little squished, but not bad," I answered.
"Is it for a special occasion?"

I explained Becky's dilemma, and he agreed that the cupcake would be good both for celebrating getting an apartment and helping with not getting the one she wanted. We ended up talking for the rest of the ride to Alewife. He had grown up in the town next to mine, and so we chatted about growing up in suburban Boston until we both got off the train to continue on our ways home. It made my trip feel more pleasant than if I'd spent the whole time with my headphones plugged in. As he left, he told me he hoped my sister would like the cupcake. She did, despite the imperfect frosting.

What kind of commute do you have?
Have you run into anyone or anything interesting during it?
Posted by Laura Chanoux at 7:37 PM