Since I have one more week before I start working in the real world, I am going to try to take advantage of the extra time to update this blog more frequently! This week's topic: summer and everything I love about it.

When I think about summers, the first place my mind goes is to ice cream. This is partially because it is a wonderful warm-weather treat, but also because in my hometown, getting ice cream with friends is just about the only evening activity available between May and August. The rest of the town closes down at about 8:30, and while sometimes there are outdoor concerts or events, ice cream is the only thing to count on. Plus it's delicious. There are three ice cream places that have defined my summers from childhood until now. 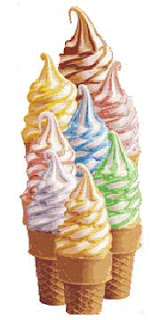 Bedford Farms is a short drive from Lexington center, and I adore it primarily for its flavor burst soft serve. That's the type of ice cream that has the colored lines up the side of each swirl. Bedford Farms has a range of flavors in this style, including cotton candy (blue), butterscotch (golden), pistachio (green), and raspberry (pink). They also have great ice cream flavors, but since the flavor bursts are what make them different for me, that's what I stick to. After school in the spring my junior year of high school, some friends and I volunteered at one of the elementary school's science clubs. We had just enough time to run to Bedford Farms, devour some ice cream, and make it back for the 3:15 start of the program. Perfect.

There are several Kimball's around Massachusetts, but the one I went to growing up is in Carlisle. Its defining feature is the massive amount of ice cream you get, no matter what size you order. I can usually finish a kid's size, and sometimes a small, but even that's pushing it. When my uncle visited one summer, he ignored my family's warnings and ordered a large. He spent a good portion of the afternoon trying to get strangers to eat some of his extra ice cream. The ice cream is delicious, and they have dozens of flavors. It's also on a farm, so while you enjoy some Butter Pecan in a cone, you can watch chickens and goats. They're also open until 10, which is always a plus in suburbia.

Rancatore's opened in Lexington when I was in high school. As far as I know, it is still the only ice cream shop in Lexington center. Ranc's staff tends to be primarily LHS students, and it was rare that I could walk in without recognizing someone. (One of the first signs I was growing up was when I returned to Lexington during a college break and didn't know anyone working at Ranc's. It was a weird feeling.) Ranc's has creative ice cream flavors - my favorite has always been Gingersnap Molasses - and wonderful frappes. (Also, the fact that I can go in an order a frappe rather than a milkshake makes me feel like I'm at home again. I really missed the east coast when I was in Michigan.) Rancatore's is also the only place I know of in Lexington that is open until 11 pm, making it a go-to hang out spot for anyone who wants to be out of the house after 9.

There are tons of other great ice cream places around Massachusetts, but these are the three that always pop into my head. Summer to me has always meant ice cream, and ice cream has always meant Bedford Farms, Kimball's and Ranc's. So far I've found one place in Philadelphia that compares, so maybe my summer ice cream repertoire will be expanding soon.


Where are your favorite ice cream places in Massachusetts? In Ann Arbor? In Philly?
Posted by Laura Chanoux at 1:43 PM