It's been a while since I've updated this blog, partially because I've been busy trying to find paying work and partially because writing about my favorite places in Ann Arbor, my go-to theme, makes me miss U of M too much. I've also run into the same feeling that I encountered when I first moved to Michigan for school. Most of my friends were scattered around the east coast, and while they might have loved to visit me, getting to Michigan was much harder than, say, hopping a bus to Boston or New York. Now many of my friends are in the midwest (though now I am closer to my east coasters!), and the cost of a flight to Philly is a little daunting. So while writing about places in Philly on this blog will happen, at this point it feels like I would just be trying to convince my midwestern friends to come visit me. (But please do! We would have so much fun!)
So, tonight's post is about the past few weeks. This has been my first time living in a large American city. Though I like to say I'm from Boston, I'm from the suburbs. While Ann Arbor was certainly bigger than my home town, it was not as large as Philadelphia. Moving down here has been a bit of an adjustment, due to both the lifestyle (I don't have to go to class? What?) and the location. 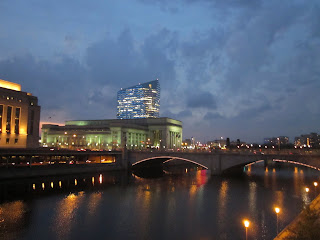 While I'd gotten used to the sounds of ragers on my street (and, for the last year, my crazy neighbors' fireworks displays), there are new noises here. There is a gate across driveway of my apartment building that beeps whenever any cars enter or exit. For the first two weeks, I thought it was my neighbor's alarm clock. I kept wondering why it took them the exact same amount of time to shut it off and why it went off at such odd intervals. There is also more traffic noise overall, which freaks out my mother when I call her as I walk around the city. Over the phone she can hear the honking horns and high-pitched wailing of police cars, so she often interrupts me to ask, "Are you watching where you're going?!" or "What did you do?!"

There are the small things, like how I have to force myself not to arrive places on Michigan Time. Ten minutes past the hour in the rest of the country is not just on time. Also, whenever I see a bar that has Oberon on tap, I feel like I must order it to drink in all the Michigan I can. Sadly, none of the bartenders here have served it with an orange slice. I also have yet to sing karaoke at a bar, but I'm not sure it would be as fun without the normal Sunday night crowd.

There are really good things, too. I have heard some hilarious conversations on public transportation. On the bus last night, a teenage boy was sitting near me, talking on the phone with a friend. He was on his way to Burger King, and after a pause I overheard, "What? You want me to buy you a burger? We in a recession, times is hard." It made my night.

Happily, I also really like my internship. I'm learning a lot about publishing, and am feeling slightly less terrified about choosing a career path. To make interning even better, there is a nest of baby birds outside the front door: 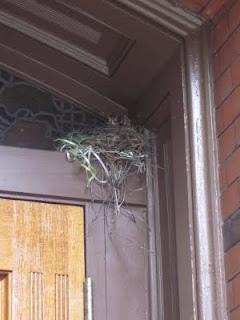 I am still just finding my way around the city and adjusting to life after college, but so far I'm enjoying the direction I'm headed. I'm getting used to the noise and bustle of the city, and even though I miss Ann Arbor and Boston like crazy, I'm excited to make Philadelphia my own.

How have you adjusted to new cities? What stood out most to you at first?
Posted by Laura Chanoux at 10:09 AM