There's No Question for This

I have spent these past few weeks dropping off a lot of resumes, writing batches of cover letters, and filling out many, many job applications. I found myself getting tired of writing the same information over and over (though now I have several of my references' phone numbers memorized). When I started feeling that I was repeating myself, though, I began wondering about the things that don't appear on my resume or that do not come up in my most recent work history. After being trained for several years on how to make every activity into a bullet-pointed section that will get me a job, I'd like to share a few things that might not come up on job applications.

Favorite moments from my last job

If you were reading this blog back in March, you might remember that one of my all-time favorite things is when my coworkers checked out popular titles at my library job. I really enjoyed many aspects of that position. While in interviews I do discuss how much I liked building relationships with library visitors and working with the (often hilarious) other student staff members, the smaller details of the job do not necessarily come up. How can I explain in an interview how satisfying it was, after sorting through stacks of DVDs, to discover that someone had swapped the cases for two discs from Dexter Season 4? That after half an hour of finding all the DVDs in the correct boxes, I was justified because I had found a mistake and fixed it? Or another good moment: someone came in asking for a comedy, and I suggested Kiss Kiss Bang Bang, one of my go-to movies. The guy said he'd already seen it on my recommendation and liked it, so that's why he was asking me for more movie ideas. (That also made up for all the times I recommended Dog Day Afternoon and no one rented it.) While these get blanketed under "working with customers" and "problem-solving," they were moments that made my job a lot of fun.

At job interviews a good attitude is absolutely necessary. So far I haven't found too many interviewers asking about what I haven't liked about past jobs, and even if they did I would most likely downplay any bad experiences I'd had. (Though truth be told, I've been very lucky so far!) My first ever job was at a fabric store in Massachusetts, and it has taken me years to get over the fear of answering phones that I developed there. At a fabric store, customers call for the usual questions: What are your hours? Where are you located? Are quilt squares on sale? and so on. But they also call with very specific questions: Do you have red buttons that have four holes and are a quarter-inch wide? Do you have a blue marble that may have fallen out of a lawn ornament from your seasonal section? When I worked at this fabric store, there was often one manager on duty, one person at the cutting counter, and maybe one or two associates at the cash register. If it was a busy afternoon, any mad dash to look at the wall of buttons would result in a line at the cash register and angry, impatient customers. If I didn't dash, though, the bright red "on hold" light would remind me that soon I would have to confront the angry, impatient customer on the phone. It was lose-lose. After my next job (not at a fabric store), I got over my fear of phones. Also, after answering phones in France last summer, I have found that if a phone rings at my work in the U.S., it can't be as intimidating as talking to angry, impatient French mothers. 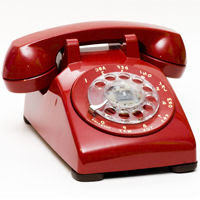 Red makes it that much scarier.
And for my next trick...

People often have talents that do not appear on their CV. Not all of us may be able to send out video resumes like Barney Stinson, which demonstrate our skydiving skills or commitment to America. For example, one of my good friends can do a spot-on Macy Gray impression. Another can make chocolate chip cookies in less than 15 minutes. From my job applications, interviewers can tell that I can speak French, but they don't often learn that I make good crepes. They also can't tell that I have an internal radar system that lets me know when I'm within 100 yards of an adorable small dog. (Someday this talent will come in handy, I just know it!) They also might not learn that I like to think I can take pretty good travel photos. (Though my sister has the photography talent in the family; check out her picture of the Law Quad!) 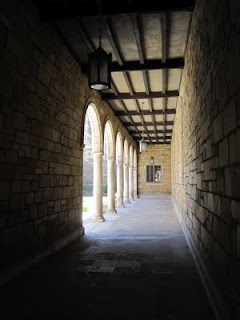 So while writing cover letters and sending out applications makes me feel a little boxed into the different bullet points on my resume, I do like the chance to think back on my various jobs up to this point. I'm looking forward to more favorite moments and interesting stories!

What are talents that don't show up on your resume?
What stories do you have that might not make it into job interviews?
Posted by Laura Chanoux at 5:47 PM