A Book and a Cup of Tea

I recently read Sherlockian by Graham Moore, which I really enjoyed. I feel a little blasphemous, since I haven't actually read any of the real Sherlock Holmes mysteries yet. (They're on my list for the summer! Really!) However, I think it's a sign of a well-written book if even someone who is not especially familiar with Sherlock Holmes can find it hard to put down.

A theme running through the book was the idea that even though the past had its share of horrors and tragedies, there's a certain romanticism to the late 1800s that readers of Sir Arthur Conan Doyle's work wish to recreate. In a scene with two men who switch gas street lamps for electric ones, Moore writes: "So much that had been hidden was revealed in the electric light, so much had been gained. But perhaps something had been lost as well. Perhaps, both men thought but did not say, a part of them would miss the romantic flickering of the gaslight." (page 346).

I have to say, I often feel the same way about Agatha Christie mysteries. To me, there's something romantic about the idea of Britain in general - afternoon tea, the royal family, words like "wanker" and "flat" and "loo." There's something that seems special and dignified about Britain in the 1930s through the 1950s that attracts me in the same way that having a tea party did when I was growing up. (If I'm being honest, I still want to have tea parties on a regular basis. The only difference is that this time I'd drink tea instead of water and the cups would be regular-size rather than doll-size.) Reading an Agatha Christie book allows me to imagine that if I step outside my door, I might see double-decker red buses and someone might offer me a scone or ask me my opinion of how Scotland Yard handled the most recent unusual crime. 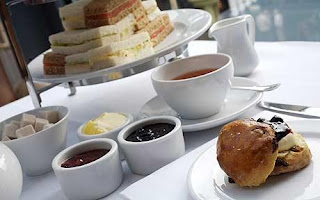 Clearly I'm not the only one, since I found this picture with this article.
Other people relate Agatha Christie to tea!
Also, I get to indulge in the idea that if ever my heirloom jewels were stolen or I had a sneaking suspicion that my long-lost brother was not actually the same man who had recently returned, I could call Hercule Poirot, who would use those gray cells in his brain and solve the crime. (This would also assume that I was the type of person who had heirloom jewels or a long-lost brother.) Or, if I visited St. Mary Mead, Miss Marple would pour me some tea and tell me about the latest crimes in her village that she had solved. 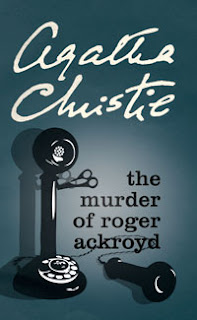 If you haven't read any Agatha Christie, at least read this one.
It was published in 1926 and is my favorite mystery.

Within this romantic world of fiction and tea and detectives, there is also the appeal of rationality. Graham Moore makes this point in his book, since Sherlock Holmes was one of the most famous rational sleuths, and it's absolutely true - the world seems safer if all crime can be solved by simply observing, thinking, and determining the only possible way the crime was committed. In a world where there is much uncertainty and many unfathomable tragedies, imagining a life in a small British village or in the London of the turn of the century - whether true or completely off-base - is comforting.

For me, the entire United Kingdom is easy to romanticize, but that certainly doesn't limit the time or place. Growing up in New England, I loved the colonial era and thought often about living on Plymouth Plantation. When my second grade class learned about the Oregon Trail, my teacher set up a covered wagon for us to play in, and two kids were selected during "silent reading time" each day to read in the wagon. I also still like to imagine that there were actually dragons in the medieval era.

There's a certain fantasy to the past - it's easy to examine with rosy vision, to see the events that you want in the way you want and ignore those you don't. As a history student, I can understand the dangers of this, even in leisure activities. (For a great article about selective historical memory in relation to X-Men: First Class, check out Ta-Nehisi Coates op-ed in the New York Times from June 8.) It's fascinating to me how history can be altered for varied purposes. But still, on any given summer afternoon, I would be thrilled to curl up with a pot of tea, a scone, and an Agatha Christie mystery so I can disappear into a seemingly more dignified era.

What historical periods seem romantic to you?
Are there any books you've read that get you caught up in a different world?
Posted by Laura Chanoux at 1:04 AM