I recently started working at a coffee shop/cafe here in Philadelphia, and so my sleep schedule has been out of whack. Opening shifts start at 6 am during the week, and closing shifts can last until 11 pm. Coupling that with my 10-5 job two days a week, I have been feeling more than a little jet-lagged. After opening shifts, I often find myself napping between 5 pm and whenever I hear dinner being made, then I have a hard time falling asleep at a normal hour. In addition to some late nights, this schedule has also reintroduced a habit that I thought I'd kicked when I turned in my thesis: the midnight snack.

For the last two semesters of college, I never had a class before 10 am, and even then, it was only three times a week. The other two days I got to sleep until noon, if I had any class at all. Because of this, I frequently stayed up until about 2 am. (I'd like to say that I used this time to diligently work on my assignments, and not watch many TV shows online.) Now, when I would eat dinner at 6:30 pm or so, I would often find myself up reading through assignments or writing my thesis (or watching Parks and Rec...) at midnight, and my stomach would start to grumble just a little. I wouldn't want a whole meal, but I'd want a little something... and a little something can quickly become a regular nightly event.

On a related note, while I am often lazy in the afternoons and evenings, I also like to feel like I'm being at least a little bit productive. For some reason, my solution to this often involves making baked goods. I whipped up some apple muffins a few weeks ago, and during the 4th of July weekend I made this: 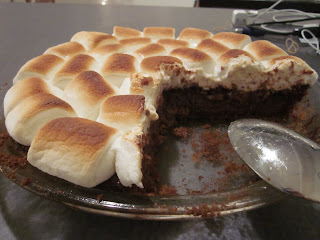 I would have cut a bigger piece but Eric stopped me.
Damn nutrition.

That is a s'mores pie: graham cracker crust, chocolate filling, and toasted marshmallows on top. It is exactly as delicious as it looks. I got the recipe from this website. (The only change I made is the oven temperature - the writer used a Tyler Florence recipe for the chocolate filling, and while she set her oven to 325 degrees, he set his to 350 and it cooked faster.) It was a great treat and definitely a good use of my time.

However... there were only two of us to eat this pie. We each had a piece that night, but it is very rich, so we had most of a pie leftover in the fridge. For the next week, each night I would think: "Well, I'd like a little something, but I guess it's getting late. I could just go to bed. Or..."

Pie that's made of chocolate and marshmallows, it turns out, is not a good midnight snack. Something about excessive amounts of sugar, I guess? It is absolutely delicious and tasty and seems like a wonderful idea until I realize that I am super awake and it's 2 am.

Here's another picture. It was a very photogenic pie. 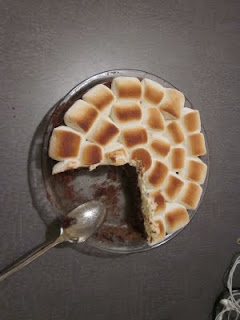 I would have taken photos before I cut the first pieces but I really wanted to eat it...
It seems that it will take some more time before I truly get out of the midnight snack habit. Until then, I will try to stick to non-sugary, non-caffeinated snacks. At least until I bake again, that is.

Do you find yourself eating midnight snacks? Do you have any favorites?
Posted by Laura Chanoux at 1:56 AM