Another entry in my series on ideal future career plans

Last summer, I had the opportunity to travel around Europe for several weeks after living in France for two months. I visited parts of France, Italy, Greece, and Turkey and loved them all. I discovered new favorite foods (gelato, gyros, and baklava), drinks (Mythos beer, Turkish apple tea) and saw beautiful places. I also met interesting people, both other travelers in hostels and permanent residents. One Turkish store owner gave my boyfriend and me tea and had us sit outside his shop and chat with him for a while. At a sandwich cart in Istanbul, we met a couple who had saved up to travel around the world for two years. One of my favorite people we met was working in Paris.

When we were visiting Notre Dame, I started chatting with one of the workers as we waited in line. His job was to stand at the entrance for the top terrace of the cathedral and let a certain number of people up at a time. He told me that with his view, he could watch how the sky changed during the seasons. Because he was up there all year, he saw things that no one else took the time to notice. There had been times when light cut through the clouds in ways that paintings always depict but that seem too perfect to be real. After talking for a bit, it was our turn to head up to the top to look around. On the way back down, he stopped us to tell us what he thought the best view in Paris was from the top of Sacre Coeur, then gave us directions. To get there, we had to take a side door that few people knew about and which was set to be closed relatively soon. He was absolutely right about the view: 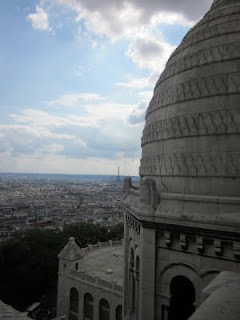 It did take several dozen steps to get up there, though. I love finding places like this. Ideally, I could make traveling a career. I could work for the travel section of a major newspaper, explore new places and report back on the food, culture, and hot spots. I'm sure it's harder than it sounds - food writers have to eat at some pretty bad restaurants along with the good ones, I know - but it could be a lot of fun. Worth dreaming about, at least!

Even if I'm not a travel writer for my career, I do love traveling! Where do you suggest I visit?
Posted by Laura Chanoux at 2:10 PM