Another place I miss in Ann Arbor

The Brown Jug on South University is one of my favorite bars in Ann Arbor. The drinks are great, the staff is so friendly, and it has a great atmosphere, even when it's a crowded Saturday night. It's covered with Michigan memorabilia, so it's a good place to go to watch games. I have a lot of great stories from the Brown Jug, but I'll just share a couple here. 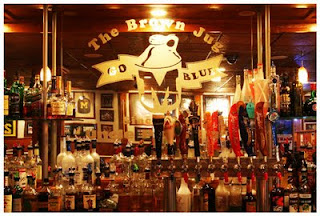 (Many of my photos of the Jug have people in them, so this is taken from their website)

On my 22nd birthday, my boyfriend and roommates threw me an incredible surprise party that started at our house, then moved to the Jug. One of my roommates made everyone who attended wear pointy party hats out to the bar, and we had a wonderful night. As soon as we walked in, one of the bartenders I know started mixing up my favorite shot for everyone in our group. Later, the lights in the bar suddenly came up, the music stopped, and everyone started singing while my friend brought out a cake. It was an amazing night, many thanks to the Jug. 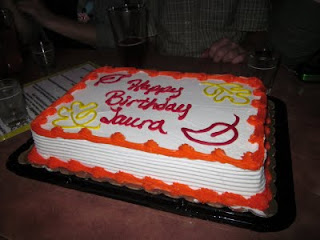 So delicious and such a surprise!

On Sunday nights the Jug has karaoke. Several of my friends are regulars, and I've got to say, they put on quite a show. From one pair's spot-on rendition of Macy Gray's "I Try" to others' impressive versions of Madonna's "Like a Prayer," there is some fantastic and hilarious singing every week. It's a fun night, filled with good drinks and friends. Since it's a Sunday, the bar is less crowded, at least until karaoke gets going. I have also been known to sing a song or two, though usually with friends - one night I was especially proud when several of us sang "Africa" by Toto. It's been several weeks since I moved out of Ann Arbor, and every Sunday night I feel a bit of a twinge, wishing I could be back there singing with my friends.

Whether I go there for the waffle fries, the John Dalys, the good beer, or because I'm almost guaranteed to run into someone I know, the Brown Jug is a great place to be. It is absolutely one of the places I miss most in Ann Arbor.

Do you have other favorite memories from the Jug?
Posted by Laura Chanoux at 7:16 PM