I have been living in Philadelphia for just about a week and so far have been enjoying my time in the city. Rather than think about how much I miss Ann Arbor, I'd like to share a new place I tried this weekend.

My sister came over for dinner on Saturday night, and she told me about a crepe restaurant she'd tried recently. After she spent a while describing delectable, mouth-watering desserts, we decided to just go out and get some. The chocolate chip cookies I had in the apartment were not going to be satisfying after that conversation.

After a short bus ride and a few blocks' walk, we ended up at Beau Monde. It gave me two things I missed most about France - outdoor seating and Breton crepes.

I spent last summer in Brittany, the northwest region of France. Rather than rolling their crepes or folding them into triangles, they fold them into squares, like this: 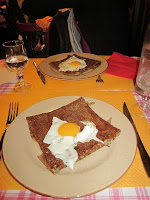 This was an egg, cheese and probably ham crepe in Rennes. Delicious!
My sister and I each got sweet crepes. The fun thing about Beau Monde is that they give you a list of ingredients, and you pick whatever you'd like to add together for your dinner or dessert crepe. (They also have suggestions for if you're like me and get overwhelmed by choices.) The price varies based on what you add to your crepe. My sister tried cherry compote, chocolate and creme Anglaise, while I tried baked pears, chestnut cream and chocolate. Both were delicious, though I think next time I'd like to try something with more fruit and sorbet.

The inside of the restaurant is elegant, and along the sidewalks outside they have a raised seating area with a thin iron railing surrounding it. We sat outside under a big yellow umbrella - I was so glad it was a nice night.
Some of my favorite experiences last summer involved crepes and sitting outdoors. During the first weekend trip I took by myself (to see castles!) I stayed in Tours. For dinner, I wandered around the city's restaurant district. It was probably more touristy than other parts of the city, but it was a lot of fun. I found my way to a quiet restaurant for dinner. This was surprisingly easy. It was in the middle of the World Cup, so the only restaurant without a huge crowd was a small crepe place that didn't have a TV. I ordered my first kir (white whine and creme de cassis) and a dinner crepe, sat by myself, and read a book. (I picked it up at the train station because it looked easy to read. It turned out to be the French equivalent of a Nicholas Sparks novel.)

In the last week of my time in Nantes, I also went out for crepes several times with the two other girls from Michigan. We found one creperie in the Bouffay district that was wonderful and had a great outdoor patio. During that week we went at least three times. I also loved the cafe culture in France during the summer, where you can sit outside with a drink, watch people go by, and enjoy the weather. In Nantes' restaurant district almost all the streets were for pedestrians only, so sitting outside did not mean you'd have to talk over the sound of car engines or risk accidentally tripping a biker.

But now back to Philly. Beau Monde's street was relatively quiet, so we could have a conversation easily. Also, because we were close to South Street where there are a lot of bars, we got to watch several bachelorette parties wander by. Sitting with my sister at Beau Monde and happily eating our crepes reminded me of last summer and how much I loved France. It was a great evening and I am definitely looking forward to spending more time exploring Philadelphia.
Posted by Laura Chanoux at 11:34 PM