After an overnight in Budapest, Eric and I caught a night train to Transylvania, a northern region of Romania.  I did not realize it existed outside of Bram Stoker's masterpiece until Eric assured me it was a real place.  We started our Transylvanian exploration in Brasov.


I had no idea what to expect from Romania.  We had heard conflicting stories from friends and I was concerned about getting around.  After a month in England, I was also nervous about heading back to countries where I didn't speak the language.  However, most people we encountered in Brasov spoke English, which made visiting easy.

Exploring Brasov felt like getting lost in a story with some modern twists.  The spires of the churches stood out against the autumn colors on the hills.  The "BRASOV" sign was a little odd, but who doesn't want a little more Hollywood glamor in their lives?

We saw the smallest street in Europe and houses painted the color of mint chocolate chips.  We also found some of the best hot chocolate I have ever tasted at a German bakery chain.

Our Halloween was surprisingly low-key for what could have been a night of wildness and vampires.  (We did meet a psychic at a bar the next night, though!)  It was our three-year anniversary, so we went out for a fancy dinner at an underground restaurant.  We shared a bottle of white wine, ate delicious traditional food and ended the evening with caramelized apples and ice cream over crepes.

After six nights of enjoying Brasov, we decided to spend a day in Sighisoara, a small medieval town a few hours away. 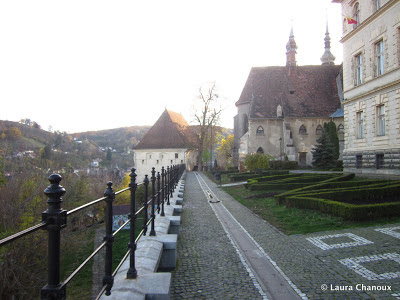 Sighisoara is small and perched on top of a hill.  The views are beautiful, especially from up by the church.  I loved walking up and back, admiring the autumn colors all around us. 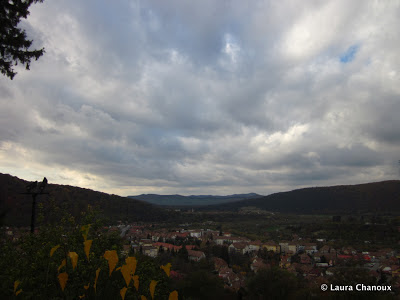 The owner of our hostel in Brasov described Sighisoara as relaxing.  You can see everything in two hours, she said, but it's a just a calm place to be.  Aside from the church and a few other historic buildings, there isn't much to see or do in town.  However, it's a lovely place to walk around.  We enjoyed spending time in some of the cafés, including one that was so pretty I could barely focus on my wine and chocolate cake.

Most of the cafés and restaurants shut down by ten at night, so after a full day we were ready to move on.  If you're in the region, it's definitely worth a stop for a night or two.

Just to warn you, if you do go to Sighisoara and arrive by train, the station has a bit of a, well... murder-y vibe.  The ticket office was fine, but the platform lights flickered menacingly. The tunnel leading between tracks had broken tiles and was only lit by the ambient light from above the stairways.  Stray dogs wandered around and we could hear constant barking in the distance.  A drunk guy wove between the passengers waiting for their trains.  An old woman sat next to us and asked us questions, despite our confusion and repeats of "Only English, sorry."  Eric studied Russian for a bit and told me that for a while she was asking, "Why don't you speak Russian?"  Eventually she decided we were waiting for the wrong train (I think?) and walked away.  If you arrive by train at night, don't let the station put you off.  The town is worth the creepiness you have to get through to see it.


Our train was delayed for about a half hour and I was really happy to finally get on when it pulled in.  We made our way to our cabin for the night to find that we were sharing it with a man and his cat.  The man had spread out quite a bit, but nicely moved bags around to make space for us.  I admittedly was less happy to see the pile of kitty litter and cat droppings on the floor (though contained on plastic bags).  The cat was friendly and understandably couldn't be kept in a small cage for the eleven-hour trip, but I was still a little relieved when Eric suggested we find the dining car for a drink.  The train was mostly empty, so we moved around from the dining car to first class to an empty second class carriage during the night.

We arrived in Budapest a little after nine the next morning.  The owner of our hostel knew we were coming in on the night train, so she made sure our beds were ready.  It was just about the best welcome I could have imagined.  We dropped our backpacks, kicked off our shoes, and fell asleep almost immediately.

Up next: three days in Budapest!


What historic towns have you visited?
Have you gotten to travel to a location from a book?
Got any creepy train stories?

Posted by Laura Chanoux at 2:00 PM