Baths of Green and Orange

After spending a month in Oxford, Eric and I decided we should see at least one other city before we left the United Kingdom.  We chose Bath, a small city where my mom spent a semester of college.  I heard her talk about it as I grew up and I was so excited to have the chance to see where she'd been.  As soon as I told my mom where we were headed, she sent me an email full of recommendations.  "You will really feel like you are in a Jane Austin book," she wrote.

My mom was right — Bath does match the idea I always had of an old English city.  The streets are small and lined with old stone buildings.  There's a certain grandeur to each avenue, whether it has million-dollar homes or fish and chip shops.
Much my inspiration for travel comes from my family, and being in a city that meant so much to my mom felt different to me.  I wasn't exploring somewhere new, exactly.  I was finding my way around somewhere that I had heard about in stories and had imagined since I knew what England was.

Bath is a striking place, where I found it easy to simply wander and admire the architecture.  I picked out at least six streets I would live on if I had infinite resources and the need for multiple homes.  One of my choices, the Royal Crescent, is one of the city's best known landmarks.  The semicircle of homes is not just beautiful, but it has quite a view over the countryside.

We were lucky to visit in the autumn, when the trees were bursting with colors.  The chilly air and local cider put me in the mood for apple picking and pumpkin carving. 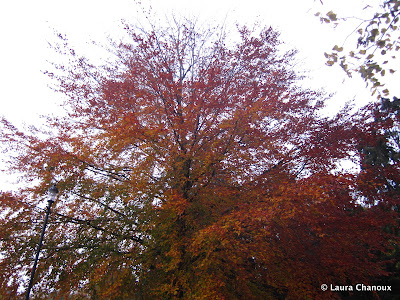 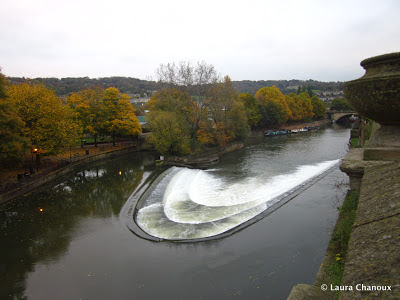 The Roman Baths complex is huge and filled with a combination of ruins and still-heated pools.  We watched the steam rise from the bubbling water.  The water has been considered "curative" for centuries.  At the end of the walk-through of the baths, there is a drinking fountain of treated water to try.  It has a distinct flavor, maybe of old rocks and old Romans.  I can't attest to its health benefits, since I neither felt better nor worse from drinking it.  Maybe I can store up the good minerals for cold season.

Bath has several new-looking shopping streets and other small walking streets.  It was a great place to wander around in the afternoon, poking in and out of stores and cafés.  Sally Lunn's is the one place I'm sad we missed.  It has made Bath buns for hundreds of years.  Unfortunately we didn't get to visit for tea and buns, but I'll take any excuse to return to Bath.

Bath was our last stop in the United Kingdom.  After a few days, we flew to Budapest and caught an overnight train into Romania to start the Eastern European part of our journey.


Have you visited a place a family member or friend had lived before?
Have you gotten to see bright fall foliage this year?
Posted by Laura Chanoux at 5:16 AM