Women on TV Part I: My Problem with Pam

Sophomore year of college I took a class on Sex and Sexuality in US Pop Culture.  For my final paper, I wrote about depictions of single white women in film throughout the twentieth century.  Since then it has been nearly impossible for me to watch movies or TV shows without analyzing the characters, if only to myself.  (After watching He's Just Not That Into You with my mom and sister, I learned that maybe analyzing out loud is not as much fun for other people as it is for me.)  I watch a few TV series regularly and in the past couple years I've been disappointed in the women on some of my favorite shows.  I have strong female role models - my mom, sisters, friends and teachers - but I still like to see great female characters in fiction.

The Office gives receptionist Pam Beasley a strong story arc for the first four seasons.  Pam slowly gains self-esteem and begins to speak her mind and demand more out of her relationships.  She finally decides to pursue art seriously and enrolls in a summer graphic design program in New York City.  From the first season through the fourth, Pam grows from a woman waiting for her fiancé to finally set their wedding date to a woman who tries to achieve some of her dreams.

Then the storyline begins to change.  Pam fails one of her classes, and rather than stay in NYC for another three months she returns to her old job in Scranton and her boyfriend Jim Halpert.  Fine - long distance relationships are hard and who didn't want to see Pam and Jim in the same city again?  Let's ignore the fact that Scranton is only two and a half hours from NYC and Pam could possibly have found classes at a local college back home.  Pam continues to grow, just in a different direction: she joins the Michael Scott Paper Company as a salesman.  When she later re-joins Dunder Mifflin, she continues to work in sales.  Pam is moving up, demanding a more lucrative and challenging career.  The only problem?  She's bad at sales.  This makes sense for her character, but rather than searching out a more suitable job, Pam cons her way into being the office administrator.  It makes for a good episode, but shows that Pam has failed again.

In the episode "China," Pam has a new challenge as the office administrator.  Dwight Schrute, who owns the office building, starts making unwelcome changes to save money, including un-plying the toilet paper and installing irritating motion sensors.  Pam threatens to find a new office space for Dunder Mifflin to rent, but Dwight calls her bluff when she claims to have found a better office for less money.  She confesses to Jim that she's afraid of failing again, just like she did at art school and sales.  After Dwight's assistant slips Pam a book of city building regulations, Pam proves that Dwight is breaking laws and thus everything in the office goes back to normal, thanks to Pam.  A success - except that Dwight overhears Pam discussing how upset she would be to fail again, and so decides to give her the leverage she needs to win.  This episode ends by proving that Pam would have failed again without Dwight's pity and help.  Pam is no longer the strong woman that the first four seasons had created, but a woman whose career has become a series of failures.  She's given up on her goal of being an artist - her paintings and drawings are rarely mentioned after she leaves art school. 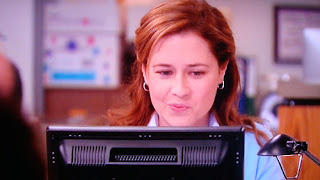 What does that leave the viewer with?  Sure, The Office is a comedy that focuses on somewhat ridiculous characters.  However, Pam and Jim's story lines have always been the more serious counterparts to Michael Scott's shenanigans.  After Pam's emotional growth, it is disappointing to see her fail again and again.  In the current season (I mean, I love James Spader but I still think the show should have ended when Steve Carell left), Pam is pregnant with her second child and her role seems to be as a motherly-type keeping peace amongst the coworkers.  While it is admirable that Pam is a working mom, it still seems that she gave up on her career goals too easily.  Finding Pam a job outside of Dunder Mifflin/Sabre could arguably change the dynamics in the office and make it more difficult to incorporate one of the main characters into the show, but the writers continue to find ways to include Ryan Howard, a character who started as a temp and eventually became the company's youngest VP (briefly, before the court-ordered community service).  I realize that The Office is about somewhat dead-end jobs at a paper company, but the writers had gotten Pam so far since the first season.  Did they really need to make her fail quite so often?

Anyways, in order to stop dwelling on the female characters I'm less pleased about, the next few posts will be about the women on TV comedies and dramas that are strong, powerful, and don't make the little social historian in me start mumbling during prime time.  Feel free to send in your suggestions!

Who are your favorite TV characters, male or female?
Which ones don't you like as much?
What TV shows should I watch now that I'm caught up with Mad Men?
Posted by Laura Chanoux at 10:43 PM