When I got to college, I noticed that my Christmas seasons were getting a little dimmer.  I spent the lead-up to Christmas studying for finals, writing papers, and generally hiding in the library or Union Tap Room.  After Thanksgiving, I had my Christmas music playlist on constantly, but the Charlie Brown soundtrack can only put you in the spirit so much when you're facing multiple exams.  By the time I got on my plane to Boston, I had just started to relax, and then within days Christmas was over.


In the past two years, though, I noticed that there were other factors that were stealing my Christmas season away.  I studied twentieth century American history and while I loved my classes and there are a lot of uplifting stories in that time period, there are also quite a bit that, for lack of a better phrase, just bring you down.  After each lecture of my Cold War era class, I would come home and tell my roommates, "Yep, today was about atomic bombs"or "Yeah, we talked about the rise and fall of labor unions" or "Lecture today was about the Vietnam War.  I'm going to take a nap.  For a while."

The lectures that particularly stole my Christmas were about the prosperity of the 1950s and the rise of a mass consumer culture in the United States.  The economic changes, advances in technology and increased wealth across the United States contributed to the creation of the Therapeutic Ethos, the idea that you could achieve happiness through the products you purchased.  We studied marketing techniques used by various companies to promote this idea and their goods.  GM used "planned obsolescence"; by changing the car models each year, the company convinced customers that they needed the newest make even if their old cars were running fine.  Commercials for domestic products emphasized the idea that new appliances would free women from domestic labor and bring joy to mothers everywhere.  Americans began to associate freedom with the ability to purchase whatever they wanted.  You weren't defined by your contributions to the economy - the rise of white collar jobs meant that your contributions were less physically quantifiable, anyways - but rather by your ability to consume and what you consumed.

The lectures about these historical trends really put a damper on Christmas shopping.  Try to pick out gifts for your siblings when you're reviewing these notes for your exam:

Television: The “Selling Machine”...
·      Ad Industry: “Democracy of the Marketplace”
o   Citizenship based on mass consumption, consumer products are status symbols
·      Large corporations own major networks, TV was direct pipeline into family home that could bypass parents and sell directly to children
·      Clip from NBC promotional video – “Strangers into Customers” – how to use TV
From History 467: The United States Since 1945, Professor Matthew Lassiter, Winter 2011
(The class didn't lead up to Christmas, but hopefully it helps you get the point!)

As the Christmas season begins each year - earlier and earlier, it seems - I become hyper-aware of being a target of marketing.  I see Santa hats in every store, hear overly sweet Christmas music blasting, and feel bombarded by television commercials shouting to me that I can find all the gifts I should be looking for at Sears.  Is anyone else kind of horrified by the Rebecca Black "Friday" parody that's in a Kohl's commercial this year?  Or the ebay commercial where a girl ruins "The Twelve Days of Christmas" and upsets her aunt in order to let her family know that she hated the presents they gave her last year?

I'm not against Christmas shopping at all.  I love giving gifts, browsing in stores with sparkling lights, and hoping to stumble across the perfect present for someone.  Many stores, large and small, depend on the holiday season to make it through to another year.  I love the surprise of receiving gifts and the important gesture of exchanging presents with people I care about.  It's the cheap plastic ornaments placed by cash registers to be impulse buys, the gaudy reindeer, and the shopping day countdowns that make me feel that companies are taking advantage of the season rather than celebrating.  It really takes the glitter out of the lights down Main Street for me.

In order to combat the historical trend gloom/awareness of commercialization in the past couple years, I've started creating a little Christmas bubble for myself, filled with lights, egg nog, and A Charlie Brown Christmas.  (After reading this post, it should be no surprise that Charlie Brown is my favorite Christmas movie, with Christmas Eve on Sesame Street coming in a close second - apparently Christmas also lets me pretend that I'm four).  One of my roommates made us all stockings two years ago, and when my roommates made holiday cookies for their various groups and organizations, they were always nice and left the extras out on our dinning room table.  I used decorating the house and Christmas shopping around Ann Arbor to avoid studying while still feeling productive.  This year, I'm planning to spend my evenings strolling around the Philadelphia Christmas Village and baking all sorts of cookies.

I do my best to embrace the parts of the season I love the most - time with family and friends, tons of great food, decorating the tree, finding ornaments from when I was little, reading The Great Christmas Kidnapping Caper - and ignoring the parts I don't love so much - obnoxious commercials, the song "Christmas Shoes."  Though the history behind mass market consumerism is constantly in the back of my mind, it helps me to remember that the season is more about celebrating family and love than about proving that love by buying everything in sight.  Peppermint-flavored cocoa and gingerbread cookies help, too. 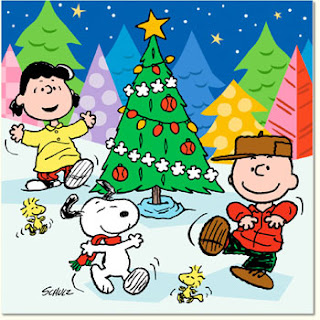 Do holiday commercials bother you at all?
What are your favorite holiday traditions?  Favorite Christmas films?  Cookies?
Posted by Laura Chanoux at 5:25 PM