As graduation approaches, I'm experiencing a lot of "lasts" - last shift at work, last day of college classes, last time I'll see some of my friends, etc. In order to avoid getting caught up in the sadness of leaving a place that I've loved for the past four years, I thought I would share a few "firsts" from my time in Ann Arbor. 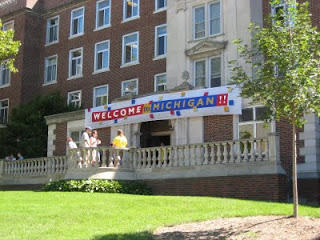 First dorm on move in day!
First College Classes: My first lecture was Great Books 191 where the professor told us the story of the Iliad. I thought all college classes would be pretty great if I could just sit there listening to stories. (Maybe that's why I ended up majoring in history.)

My first discussion section for Biology and Human Affairs was actually a no-go. Because it occurred before the first lecture, our graduate student didn't show up and we didn't actually have class. It took us fifteen minutes to decide to leave, though, and during that time I had my first interaction with an older classmate. She looked at me and said, "You're a freshman, right?" When I asked how she knew, she responded, "You look nervous." Hopefully the raw fear in my eyes has faded by now.

First Trip Off Campus: It was fall break of freshman year and I had decided to venture away from the libraries and coffee shops on State Street to a new place in "real people's" Ann Arbor: Sweetwater's Café off of Main Street. I picked it partially because it had one of Ann Arbor's Fairy Doors. (They're all over - check out that website to see! They are adorable.) However, getting to Sweetwater's took an embarrassing amount of preparation. Not only did I memorize the location and my route so I wouldn't get lost around Main Street, but I memorized the menu so I wouldn't look stupid when I got there. So with my drink of choice picked out in advance, I ventured west of campus to get new fancy coffee, look at a fairy door, and study for midterms. Happily my (small) adventure was a success. I did not get lost, I did not embarrass myself by staring at the menu and holding up the line, and I got a decent amount of work done. I felt so accomplished by the time I walked back to my dorm that I took an alternative route home. Even more happily, my sense of adventure has expanded since October 2007, and I can try new coffee shops and bars without hesitation. I'm even less afraid of getting lost!

First Drinks at Bars: When I turned 21, most of my friends were younger than me, but a few older ones took me out to Ashley's on State Street and bought me a couple beers for my birthday. We had a great night and Ashley's remains one of my favorite bars. They have an extensive beer list all compiled in a great descriptive menu. Sadly I don't quite remember what my first drinks were - likely a Strongbow cider and a Delirium Tremens (which one of my friends highly recommended with good reason!).

Once I branched out and started trying the college bars on South University, I found myself in a slight dilemma. Loud, wild college bars do have drink menus, but everyone seems to know what they want without looking. I had started hanging out with a guy I was trying to impress, so I didn't want to seem young and silly by studying the drink menus and picking something that was mostly juice. When faced with the bartenders asking me what I wanted, I defaulted to advice from my best friend (who is one month older than me): always order a gin and tonic, because it's classy. Luckily, I also found that gin and tonics are pretty tasty. The guy I was hanging out with seemed sufficiently impressed/not judgmental of my drink selection. Success! Well, at least I considered it a success until another friend laughed and told me that gin and tonics are "an old man drink." By then I had relaxed enough to check out the menus and try new things. I didn't have a repeat of my meticulously planned trip to Sweetwater's, and I discovered a drink I liked even better than gin and tonics, the John Daly (sweet tea vodka and lemonade).

First Football Game: Sadly, it was Michigan vs. Appalachian State. Let's not discuss that part. The more positive part of the day was the experience of walking to the Big House in a mass of people who were all wearing maize t-shirts and cheering in the streets. This picture of the student section in the stadium should help illustrate the amount of maize everywhere: 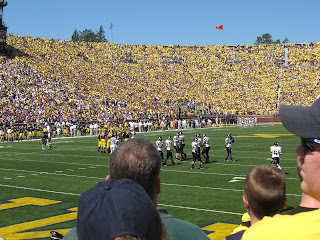 Sadly, my tickets freshman year were in the opposite
corner from the student section.
Football Saturdays have remained one of my favorite parts of being at Michigan. The stadium holds more than three times the population of my hometown, the cheers in the student section are a lot of fun, and the games are always exciting. Michigan fans have an incredible amount of spirit, and I have loved being a part of the Saturday tradition. It's fun to walk down the street and know if you yell "GO!" at the top of your lungs, many people will turn to yell "BLUE!" back at you.

Instead of dwelling on my lasts, I've enjoyed looking back on some firsts to see how much I've changed in the past four years. I am also already looking forward to new firsts: first real job, first time living in a major city, first day that I can say I'm not a student, and maybe in the future first day as a graduate student. I'll keep updating this so you can hear how they turn out!
Posted by Laura Chanoux at 4:03 PM