There are a few specific moments in the TV series Mad Men that make me want to teach American history.  One is a short scene in the Draper family kitchen in 1963 (Season 3, episode 9).  Betty Draper enters the room as her children’s nanny Carla is listening to the radio.  Carla turns it off, and Betty asks what she’d been listening to.  Carla replies that it was the funeral of the four girls killed in Birmingham.  Betty shakes her head and comments that it really is a tragedy.  After a pause she expands: "I hate to say this, but it's really made me wonder about civil rights.  Maybe it's not supposed to happen right now."  Carla doesn’t respond.

I particularly love this scene because it demonstrates one of the often-ignored aspects of that era.  Today the Civil Rights Movement is often described as a stand off between the Good Guys (the protesters and the sympathetic northerners who didn’t have Jim Crow Laws) and the Bad Guys (the South).  Eventually the Good Guys won and everyone was happy forever after.  This not only oversimplifies the time period and ignores the continuing problems of racism and inequality, but this narrative portrays all northerners as supporters of the Civil Rights Movement.  Just because there weren’t Jim Crow laws didn’t mean that there wasn’t racism and discrimination.  Betty’s response was accurate for many suburban New York housewives at that time: were discrimination and segregation really worth protesting if there was this much backlash and violence?

The struggle for equality in the northern United States is often overlooked in favor of the cleaner cut North vs. South story that many of us (probably mostly those who lived in the northern half of the country) learned in elementary school.  I remember thinking in third grade that the "I Have a Dream" speech had solved everything.  However, after the successful campaigns in the south, Martin Luther King, Jr. began focusing on discrimination in Chicago in 1965 and 1966.  The Chicago residents did not welcome him with open arms, but rather responded with screaming mobs.  During one march, King was hit with a brick.   The 1970s busing crisis in Boston is another example of northern discrimination.  While some historians, notably Ronald P. Formisano, have argued that the school integration crisis must also be understood as an expression of economic frustrations by urban white families, it is impossible to ignore the racism in the city and the discrimination by the Boston School Committee.  (On a side note, my favorite small fact from this is from Michael Patrick McDonald’s excellent memoir All Souls.  In it, he writes that he and the other school-aged kids in South Boston adopted “Fight the Power” by the Isley Brothers as their defiance theme song.)

Another factor in the history of the Civil Rights Movement that I didn’t appreciate until college is the amount of violence involved in nonviolent protests.  For some reason, whenever I think of nonviolent resistance, I imagine peaceful protests with people holding signs and singing “We Shall Overcome.”  It’s important to remember that whenever there were protests and marches, the participants often expected to be arrested or beaten.  The violence against them was part of what would prompt actual legal and political changes.  Seeing kids being sprayed by fire hoses and attacked by dogs in Alabama or people throwing rocks in Little Rock or Chicago brought attention to the movement.  A number of leaders and protesters were murdered; being part of the movement brought serious risks.  I still struggle to wrap my mind around the idea of deciding to attend an event knowing that I would likely be attacked for participating.  I have great respect for the members and supporters of the Civil Rights Movement and can understand those who thought that armed self-defense was a more effective solution to discrimination.  It's a fascinating and dark time in American history, and one that deserves to be openly examined in American history classes. 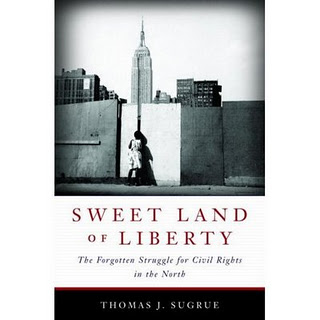 These are just a couple books I've read related to this in case you're interested, and there is much more great literature out there on the general subject:

Thomas J. Sugrue, Sweet Land of Liberty: The Forgotten Struggle for Civil Rights in the North (2009)

J. Anthony Lukas, Common Ground: A Turbulent Decade in the Lives of Three American Families (1986) - Specifically about Boston and busing
Posted by Laura Chanoux at 6:59 PM