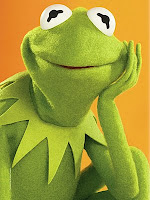 One of my English class assignments junior year was to write a speech.  I could write as any person I wanted and on any topic within the boundaries of general high school decency.  I chose to write as Kermit the Frog, calling the Muppets to band together and make better movies.  It was titled “Those Without Feet Can Still Take a Stand” – I have to admit I’m still a little proud of my seventeen-year-old self for that one.

As Kermit, I admonished the Muppets for giving in to a culture that refused to appreciate innocent entertainment.  Elmo had sold out for a snazzy dressing room with bowls of red M&Ms while unemployed Muppets auditioned for Avenue Q just to make some cash.  After Muppets From Space, all of the Muppet films were made-for-TV or direct-to-DVD.  Rather than embracing the light-hearted musical numbers and jokes from earlier films, the more recent movies relied on the same innuendoes and winking adult humor that Shrek used to draw in older audiences and to remain relevant in an increasingly crude and reality TV-driven culture.  My point was that they didn’t have to try to relate to the same audience that watched Fear Factor and The Simple Life.  There was still an audience for films that were fun, musical, and didn’t feature people who are famous for spending lots of money and making sex tapes.

Happily, five years later my call to arms – I mean, Kermit’s – was answered.  The newest Muppet movie, The Muppets, is everything I’ve wanted a Muppet movie to be.  It’s fun, it has catchy songs, and it doesn’t try to pull in adults with raunchy humor.  Besides, who doesn't love a movie where people can travel by map?  Another treat was recognizing everyone in the cameos.  I remember watching the other films when I was little and I knew that the waiter here was a famous comedian from the 1970s or the secretary there was a model.  This time around, I liked that I knew the stars not just because I recognized that they were famous but because I regularly watch their movies, TV shows, etc.  This Muppet movie felt like one for my generation or at least my time. 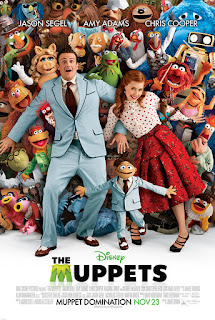 Best of all, the film again emphasizes the themes and messages that the Muppets have always been about: be yourself and do what you love.  Since I’ve discovered that life after college doesn’t come with an exciting course catalog to guide me along the way, that message is as relevant now as it was when I was a little kid.  I may have to be more practical, since hiring backup dancers doesn't work as well in real life, but thinking like a Muppet will keep me focused on working to do what I love (and working to figure out just what that is). 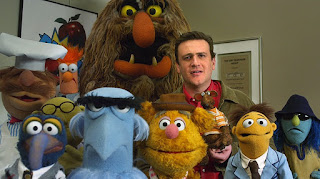 On a side note, my new long-term goal is to be best friends with Jason Segel and Neil Patrick Harris.  If you know them, please contact me so we can set up a date.  I'll bring cookies.

Did you watch the Muppets growing up?
Which of their movies do you like best?
Are there other childhood favorites that you wish would make more films?
Posted by Laura Chanoux at 5:12 PM