In the summer of 2010 I was an intern at a business school in Nantes, France.  Up to that point in my life, applying to work and live in France was the most adventurous thing I'd ever done.  I loved staying with my host family, exploring the city and practicing my French, though I was homesick and had some definite culture shock.  (Banks in France don't have cash boxes, so when the ATM gives you a 50 euro note you can't walk in and break it into smaller bills.  I still don't understand it.  It's a bank - why don't they have cash handy?)  There were two other girls from Michigan interning in the same school, which made it much easier to adjust and gave me automatic travel buddies on the weekends.

One weekend, however, I had Friday off of work and the other Michigan girls had plans.  Without my usual travel companions, my first thought was that I'd be spending all three days in Nantes.  This would have been fine since it is a great city, but I wanted to see more of the country.  Specifically, I wanted to see castles.  The idea of traveling on my own made me nervous.  What if I got lost?  What if something happened and I got stuck in a random town?  What if my guide book was out of date and the buses I was counting on were no longer running?  As I thought through the various scenarios, I also thought about what some of my favorite people would do.  My best friend Hope was living in France on her own that summer and often took trips around the country.  My boyfriend Eric traveled on his own all the time.  My aunt moved to Turkey when she was only a little older than me.  If they could do it, I thought, I can do it.  I shouldn't let myself be held back because I'm on my own.  I got out my guide book, did some research online, and planned my weekend.

My goal was to see castles, and I picked Chenonceau and Chambord.  They were close enough to Nantes and to other major cities that I could see both in two days.  Chenonceau is a beautiful castle with a fascinating history and Chambord is the biggest castle in the Loire Valley.  I plotted my trip based on train schedules and what I could figure out from my guide book and each castle's website.  Here was my general agenda: 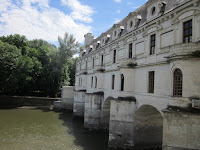 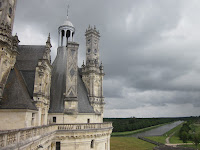 
On Friday morning, my host mother dropped me off at the train station and I was on my way.  The trip was smooth; I love train travel.  I had been worried about how to find the castle when I got to Chenonceaux, but as it turned out I shouldn't have been concerned.  When I got to the tiny station I saw that if I took the road one direction, I got to the town, and if I took the road the other direction, I would end up at the castle.  Not far from the train station there was an admissions booth and gift shop.  From there, I walked down a long path shaded by trees until I reached the castle.

I first took myself through the castle itself.  The rooms were beautifully decorated, and the guide books available explained each room's usage.  The castle has an interesting history both in regards to the French monarchy (and monarchs' mistresses) and during WWI and WWII.  Since the castle spanned the river, it was a means for escaping from the occupied side of France to the free zone.  (Here is more about Chenonceau's past.)

Next, I wandered through the gardens.  Luckily it was a beautiful day and I had plenty of time to enjoy the flowers.  After a while, I made my way into town to grab some water and to see if I could pick up a city map as a souvenir.  Nearly every town in France has a tourist office and most offer complimentary maps.  When I got to the office in Chenonceaux, the woman working there seemed surprised when I asked for one.  She showed me the map that was on the counter top - it had an area marked "Chateau" and then a line to signify the main street in the town.  In a town that small, I suppose there's not much need for a map.

I caught my train back to Tours, where I found the tourist office and grabbed a map.  As I walked to my hostel, I got to see some of the city's landmarks, like its cathedral.  Once I checked in and dropped off my bag, I took my book and found my way to a crêperie for dinner.  That night one of the World Cup games was on, and I found the one restaurant without a television.  It was nearly deserted.  I had a crepe and tried a kir for the first time.  It's a before dinner drink made of white wine and creme de cassis, and it became one of my favorite drinks.  Afterward, I grabbed some gelato and wandered around the area.  All the bars seemed a little wild since the game was on, but I got to do a little window shopping before heading back to my hostel for the night.  I know some travelers would have gone out to meet people, but since this was my first time on my own I decided to play it safer and turn in.

The next morning I woke up and walked back toward the train station.  I took a different route to see if I could find the markets that my guide book had mentioned.  I walked through a few as they were setting up and wished my train wasn't so early.  I would have enjoyed spending more time in Tours.  I caught my train to Blois as the sky began turning gray.  When I got to the city, luckily it wasn't completely raining.  I found my way from the train station to the tourist office - a longer walk than I had expected, but it took me through the center of town and I got to admire the outside of the Blois chateau.  The tourist office directed me to a bus that would take me to Chambord for two euros.  I found the stop and sat to wait.

As I waited, I got a call from one of the girls from Michigan, and we conferred about plans for the next day.  When I hung up, a woman next to me turned and said, "You seem to know what you're doing.  Is this where we catch the bus to Chambord?"  We ended up chatting as we waited for the bus and when it arrived, it turned out we were the only two passengers aboard so we talked for the forty-five minute journey there.  She was American as well, traveling with her husband, son and grandchildren.  They had all decided to bike to the castle, but traveling by bus appealed to her more.  At the end of the day, we both caught the same bus back to Blois and compared opinions about the castle.  She made my visit to the castle extra pleasant.

Once I got to Chambord, it began to pour.  Happily, Chambord is massive, so there was plenty of castle to see without going outside.  Since I was on my own, I felt free to double back and go through rooms I had particularly liked a second time.  The castle is known for its double helix central staircase.  There are also many other staircases and many floors, so it was easy to break away from the crowds and feel like I was truly exploring the castle rather than following a tour.  Chambord isn't as decorated inside as Chenonceau.  Not all the rooms have furniture, and one of the floors was devoted to a modern art exhibition.  I loved the views from the castle and all the intricate design work.  Nearly all of my photos are of the castle's exterior.

After going through the castle and grabbing a crepe, I took the bus back to the train station and began my journey back to Nantes.  It was only two days, but the trip was huge for me.  It showed me that I could get around on my own in a foreign country.  My French was good enough and I was confident enough to find my way.  If I wanted to see castles, I could go see castles.

Have you ever traveled on your own?
What have you done on your own that made you proud?
Posted by Laura Chanoux at 11:25 PM