We spent the last three days of our trip in Berlin.  In retrospect, it was an extreme contrast to the first city we visited, Phnom Penh.  Berlin is remarkably clean and organized.  Phnom Penh is crowded and overwhelming.  We started in humid summer weather and ended in chilly winter.  However, both cities have their histories constantly on display.  In Berlin, it seemed that every turn took us to a new monument or plaque commemorating World War II or the division of the city during the Cold War.  Unlike some cities that would have tried to separate from and leave behind a dark past, Berlin and its citizens have committed to never forgetting.

Eric and I visited the remains of the Berlin Wall and the museum Topography of Terror.  We walked by the Holocaust Memorial and Checkpoint Charlie.  We met a lot of German people when we were at one hostel in Malaysia, and they all had different opinions on this infusion of historical memory into modern national identity.

That said, Berlin is an incredibly modern city.  We stayed in a section filled with interesting design shops and Asian restaurants.  New buildings towered over old-style Christmas markets.

Berlin has excellent public transportation, but I found it was also a very walkable city.  I loved crossing the river, strolling past museums.  Within one night, I was sure that I would happily live there long-term.  I loved the blend of gorgeous old architecture and new structures, the wide boulevards and parks. 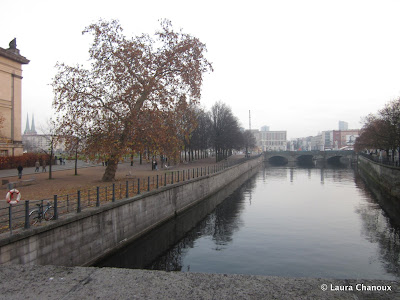 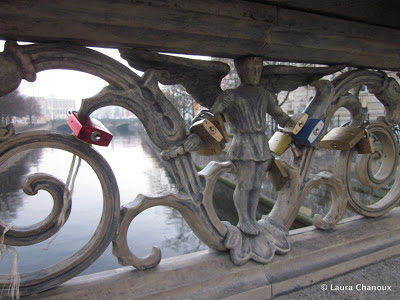 Our three days went by too quickly.  We met my friend Michelle for dinner one night, walked all over the city another day, spent an evening with our American hostel manager (whose name was Krash-with-a-K), and then suddenly we had to pack up for the final time.

It was a strange feeling to be getting on another plane, but this time flying towards the United States.  I was excited to see my family again, but it still felt like we had just landed in Cambodia a few months ago.  It's been more than two months, but I'm still getting used to being in one place again.


How do you feel when you return from a trip?
Posted by Laura Chanoux at 8:16 PM