Many Thoughts on Prague

I fell in love with Prague almost immediately.  Maybe it was the cold weather, since Eric and I have been living in an eternal summer mode since March.  Maybe it was finally being in a place with good sausages again.  (In Thailand, "sausage" often means "hot dog.")  Maybe it was the concerts everywhere or the city's history or the way the architecture made me feel like I was walking through a fairy tale.

We spent one day on an epic walking tour of the city with twenty other tourists.  During a lull while we waited to board a boat, a forty-something woman turned to Eric and me to ask, "Do you know where there are clubs here?"  We shook our heads.  Eric suggested a great brewery.  She sighed and said, "There's just really not much to do here."  Her nineteen-year-old daughter next to her shrugged, and I tried to picture what clubbing with mom might be like.

I puzzled about her comment for the rest of the day.  In some senses, I guess there isn't that much to do in Prague.  There are the touristy sights — the Astronomical Clock, Old Town Square, the Jewish Quarter, Charles Bridge — and I suppose the old city is not especially big.  There definitely are clubs, as evidenced by the girls I saw in great outfits, but I'm not sure where.

But is that really it?  I know that a lot of people travel in order to be active and see all the things and whatnot.  Isn't there always more to find?  (That's the goal of the website Untapped Cities, which has great articles about rediscovering your city.)  Prague has cobbled streets, deep history, and absolutely stunning architecture.  I enjoyed it in many ways because it was simply a wonderful place to be.

I mean, just look at the buildings.

One of my friends who lived in Prague for a semester advised me to look up often while in Prague, because much of the beauty could be found in the tops of buildings.  She was absolutely right. 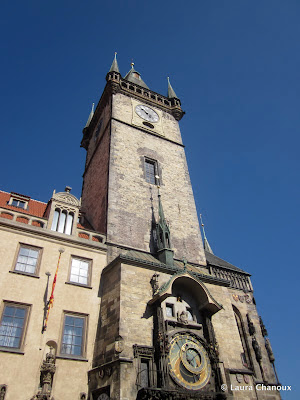 Prague also won me over with its amazing circularly-baked sweet bread.  The trdelník I ate was so good that I never had a chance to take a picture.  I devoured it too quickly.

Czech food is the definition of meat and potatoes.  It can be delicious — my mouth still waters at the thought of the potato soup, and while in Prague, I discovered that I like both cabbage and beets.  However, the traditional Czech food is frequently some form of meat coupled with potato or bread dumplings.  It's tasty, but can get a little repetitive.  That said, there were a surprising number of foreign food options in the city, so it was easy to branch out when we found we needed a salad.

The history of Prague is fascinating.  We spent one afternoon on a World War II walking tour, which pointed out many parts of the city I simply hadn't noticed.  For one, I didn't realize how swiftly Czechoslovakia moved from Nazi occupation to a Soviet-influenced Communist puppet government.  The tour guides we met spoke about this on a personal level and the city reflected it physically.  There are small memorials all over the city to Jewish citizens who were killed during the war, and one of the main buildings in Old Town Square bears scars from where it burned down during an uprising.  We saw buildings that were former KGB offices and one of the hotels where staff discovered listening devices in the walls during renovations.

One of my favorite spots was St. Vitus cathedral at Prague Castle.  The stained glass was striking.  It was not so much the designs themselves, but how the colors fell on the walls. 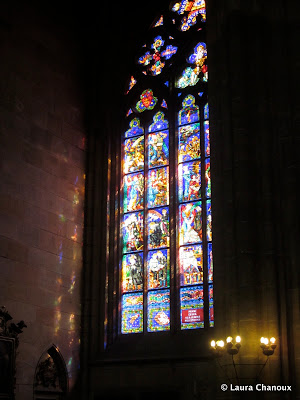 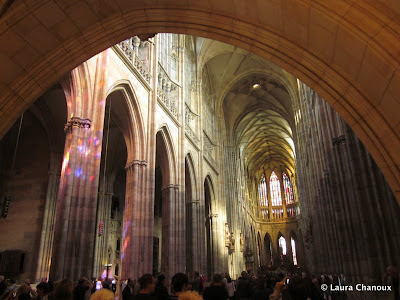 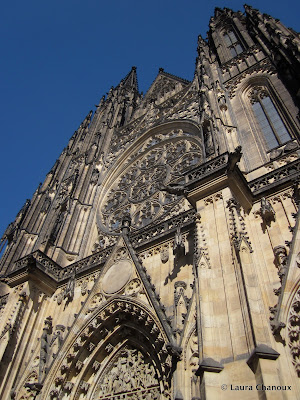 It seemed like every church in Prague had its own concert series.  One of our last nights in the city, Mrs. Reed and I attended an organ concert at a church next to the Charles Bridge.  It featured a trumpet soloist and a soprano singer.  The music was wonderful and the acoustics in the sanctuary were perfect for the bright trumpet.  It made me a little homesick.  My mom loves trumpets and organs and I know she would have enjoyed the concert as much as Mrs. Reed and I did.

I realize that this post doesn't have much of a theme aside from "I love Prague."  Even if it's a city where there might not be much to do (though I would argue against that), it is an incredible place to be.

Next up, our final stop on our trip with Eric's parents: Paris!


Have you ever been somewhere that wasn't full of entertainment,
but was still a fun place to spend time?
Posted by Laura Chanoux at 9:02 AM