On Monday night, Eric and I left Bangkok for Krabi, a town on the southwest coast of Thailand.  After a few weeks in the city, I was ready to see some beaches.  We decided to take an overnight train.  I love train travel and am always disappointed that it costs so much more to take Amtrak than Megabus in the US.  The buses from Bangkok were also cheaper in this case, but we agreed that we'd rather spend fourteen hours on a train than cooped up on a bus.


We purchased our tickets through a travel agent in Bangkok.  The train would take us to Surat Thani, where we would catch a bus to Krabi.  After a surprisingly fresh dinner at the Bangkok train station's food court, we boarded our train and handed our tickets to a conductor.  He began walking us through the cars, which were all crowded with people and luggage.  Surely we were headed to our own cabin, I thought.  The travel agent had explained that we were buying lower bunks, and I was excited to see what sleeping in trains was like.  I pictured the romance and vintage glamor I had seen in so many British films.  Then the conductor stopped, gestured to two seats, and left.

Eric and I looked at the seats, plain brown and wide.  These did not seem to be in a cabin, nor were they the fold-down beds we had expected.  An Italian couple next to us was equally confused and grumbled about getting ripped off by the travel agents.  The only apparent "upper" or "lower" things were the luggage racks, and who would pay more money just to get a lower luggage rack?  Happily, as the train left the station a woman came around serving beer.  As Eric and I settled into our wide seats for the duration of the trip, we sipped Singha and I slowly dozed off.

An hour or so into our ride, I woke up to banging sounds.  One of the train workers was going through the car, pulling out the seats to create beds and pulling a hidden upper bunk down from the ceiling.  I watched as he spread out a mattress on the lower bunk, tucked sheets around both, tossed pillows down, and moved on to the next pair.  It took less than three minutes for each set.  After reading a while longer, I curled up in my bunk, pulled the bright green curtain across, and let the movement of the train rock me to sleep.

After a moderately restful night and an early morning, Eric and I took a bus from Surat Thani to Krabi and eventually found our way to our hostel, where we checked in, cleaned up, and immediately fell asleep.  I woke up just before 11 PM and read, checked email, and otherwise wished I knew where there was somewhere I could buy food before dawn.  Eric also awoke at a surprisingly early hour — if he can avoid it, he is never seen before noon.  I realized that, for once, we had a chance to watch the sunrise together.  We set out as the sun was breaking through the predawn rainclouds.  We walked towards the water while keeping an eye out for breakfast.  More on early morning in Krabi soon. 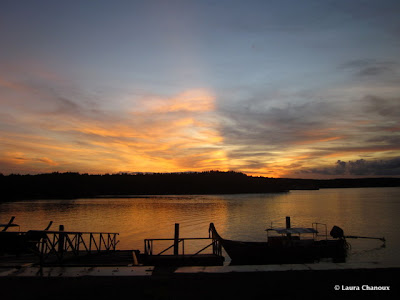 Have you ever ridden on an overnight train or bus?
How was your experience?
Posted by Laura Chanoux at 6:37 AM