Eric already put up a great gallery of photos from our early morning in Krabi, but I wanted to share a few of my own.

After our night train, my sleep schedule was out of whack, and I found myself wide awake much earlier than usual.  Eric and I took advantage of this to explore Krabi before the bustle of the day began.  We started at the waterfront, where the sunrise over the Krabi River seemed to draw a line down the center of the sky. 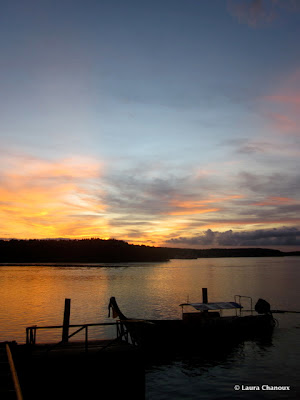 As we walked around we saw a few carts and restaurants opening for the day, but most of the streets were empty. 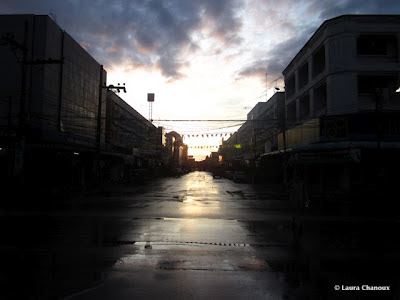 Possibly my favorite moment of the morning was when we saw this woman.  She arrived at the base of the stairs to the temple with bags of food and carefully doled out a pile to each stray cat and dog.  They followed her up to the courtyard around the temple.  By the time we had made it up the stairs ourselves, at least a dozen cats and dogs munched on their own serving of food.  Since so many animals appeared to greet her, I assume this is part of her morning routine.  I had witnessed a quiet, personal part of her daily life that I wouldn't have noticed if I arrived at the temple a few hours later. 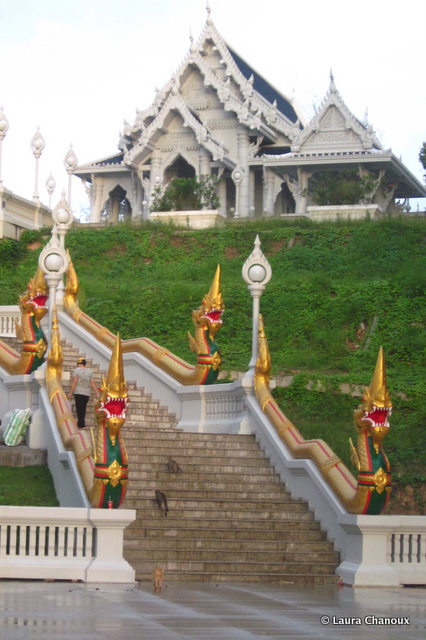 After walking down the hill from the temple, I noticed a cat creeping across the street, stalking a crowd of pigeons as they ate rice from the gutter.  The slow, silent movements of the cat made this as tension-filled as a teen horror movie and I couldn't look away.  The birds seemed to grow suspicious and began backing out of the gutter, and luckily for them a motorbike rode by and scared them off.  The cat disappeared without breakfast... for now. 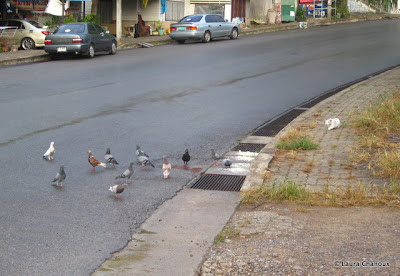 Since I had been up for about seven hours by this point, I was ready for breakfast myself.  Eric and I found Siw Mhai Yhok dim sum restaurant and feasted.  Pictured below are three of the dishes we tried: two types of pork dumplings and sweet corn over steamed pork.  The coffee was also delicious, brewed strong and sweetened with condensed milk. 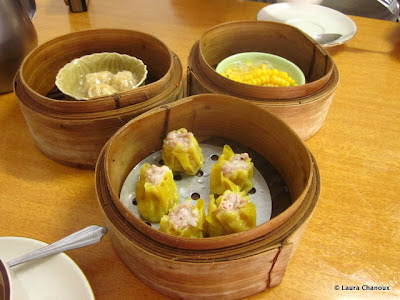 After we'd eaten as many dumplings as possible, we walked to explore the market.  On the way we passed a pet store that had outdoor cages of birds and baby rabbits.  I tried to contain my excitement, but a small squeal of joy may have been audible.

The Maharaj Market was mostly set up, with stalls of produce, meats and seafood.  I walked by men scraping the scales off of freshly caught fish while others arranged piles of chickens.  The market also had a prepared foods section, with containers of rice and eggs, sweet waffles, and dozens of other dishes I didn't recognize but wanted to taste.  We returned the next day thinking we could make a late lunch out of the different options, but the market was empty and closed up by 2 PM. 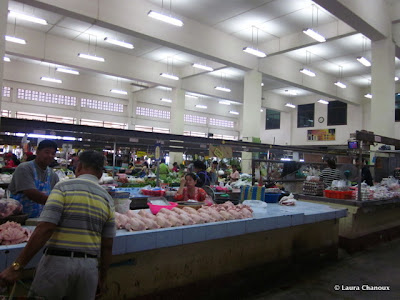 After seeing the market, I may have returned to the pet store to look at the bunnies.  Eric had to drag me away before I named them all. 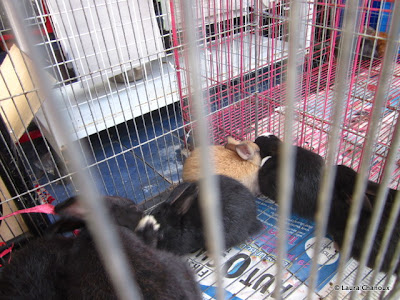 Krabi introduced me to a beautiful morning, in addition to excellent views and food.  After those first early hours, I knew we'd arrived somewhere I'd want to visit again. 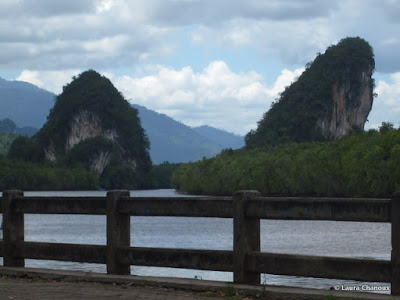 Do you like early mornings?
What have you seen then that you might not at other times of the day?
Posted by Laura Chanoux at 2:10 AM