Women on TV Part V: The Women of Mad Men 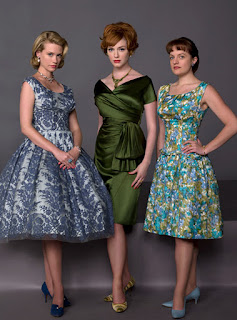 Part of the reason I enjoy the series Mad Men is the show’s commitment to creating an accurate picture of the 1960s.  The writers tie historical events into the show’s plot well, and as the series has continued from 1960 through 1964, the Cuban Missile Crisis, the Kennedy assassination, the Civil Rights Movement and even Marilyn Monroe’s death have been in the background (and sometimes forefront) of episodes.  One of the best parts of this is that it gives the viewer an opportunity to see how people in that time reacted to the major changes happening across the country.  In particular, women slowly gained access to new opportunities.  The show explores these through the women of Mad Men, particularly Joan Holloway, Peggy Olson and Betty Draper, demonstrate the different ways women reacted to these changes.

The writers have done a good job of exploring the changing role of women in the 1960s.  Though many of the secretaries seem to exist only so that Don Draper can sleep with them, the three main female characters are more representative of the complex choices women had at the time.  While the women’s movement had started to garner national attention after WWII, especially after the publication of The Feminine Mystique by Betty Freidan in 1963, the 1960s were a transition between an era when women were expected to get married and start a family by age twenty-two and an era where women had a greater range of choices.  Betty, Joan, and Peggy embody those choices and the challenges that came with them.

At the beginning of the series, Betty Draper is a suburban housewife who seems to suffer from “the problem that has no name” that Freidan discusses in her book.  Betty is unhappy but can’t explain why, so Don gets her into psychotherapy for her “nervous condition.”  She eventually quits, deciding that therapy was entirely unhelpful.  Before she married Don, Betty had been a model, and for one episode she briefly begins modeling again.  This upsets Don, who would rather have her stay at home.  He never gives a reason why she should be at home for the kids – they do have a full-time nanny – but it is clear that to him, Betty should not work because that is just how things are done.  She enjoys the money she earns modeling, but mostly she seems to enjoy being out of the house and having people admire her beauty.  Unfortunately her modeling gig is just a move by a rival advertising firm to lure Don away from Sterling Cooper.  When he refuses to change companies, Betty loses her job as the new face of Coca-Cola.  She is visibly upset, but decides to act as if she just missed being at home for the children.  Don assures her that her job is to be the best mother that she can be.  However, Betty’s desire to go back to modeling demonstrates that perhaps her “nervous condition” comes from feeling lost by staying at home.

In this way, Betty is the housewife of the 1950s and earlier.  Her place is the domestic sphere, and Don is uncomfortable when she leaves it.  After the attempt to return to modeling, Betty rarely strays from being a housewife.  She bucks tradition in her decision to divorce Don, but she only does so after she has secured a marriage proposal from Henry Francis, a well-off politician.  Betty’s character is too complicated by her circumstances to be truly indicative of a wide variety of women in the 1960s – she struggles with losing her parents and Don’s infidelity, and by the fourth season has turned into a truly childish, selfish person – but her experiences do reflect those of a certain type of woman from the early 1960s.  She married at a young age and generally accepts her place in the home raising her children.  While the expanding role of women does have an impact on her, especially in terms of her divorce, she remains a relatively traditional woman.

Joan Holloway is one of the strongest women on the show.  She is the office manager at Sterling Cooper, organizing the administrative aspects of the office and welcoming clients.  As a single woman, she is not ashamed of sex and is always faithful to the person she is seeing at the time.  While she is comfortable being a mistress, she also wants a more traditional marriage and household.  Joan embraces parts of the “new woman” of the 1960s, such as being open about her sexuality and having a job, but she also accepts certain traditions when she gets engaged and marries a man with more conservative ideas.  Her husband, Greg Harris, insists that she quit her job when they get married, though when he doesn’t become chief surgical resident, Joan has to return to work so they can make ends meet.  It is obvious Joan loves her work; she is great at working with people and is never intimidated by the men in the office.  For a brief time when the Television Department is just starting up (and is just one guy), the department head Harry Crane asks Joan to read television scripts in order to determine which episodes could pair well with which products’ commercials.  Not only does she love the job, but because she is familiar with the soap operas’ characters she can make more informed suggestions than Harry.  However, once Harry’s budget increases, he hires a man for Joan’s job.  She is disappointed, but accepts it – that’s just the way advertising agencies are.  Women are the secretaries and switchboard operators.  They aren’t the executives.

And that’s where Peggy fits in.  Peggy Olson starts off as Don Draper’s secretary.  After a focus group session with all the secretaries to test a new line of lipstick, Peggy’s comment about “a basket of kisses” catches the attention of one of the copywriters.  Peggy earns the chance to write copy for the account, and quickly begins acquiring more and more copywriting duties.  By the end of the third season, she has gotten her own office and her own secretary.  Peggy represents the new career woman, trying to find her way through a male-dominated industry.  She gets frustrated when the male copywriters swap ideas out at the bar together without inviting her; she makes enemies in the office when the other women think her new job has made her arrogant.  Her family doesn’t understand why she wants to work in the city rather than settling down with a family in Brooklyn.  Her boyfriends don’t understand why she is willing to work late every night.  She experiments with her sexuality with unexpected results, and finds men who assume she’s a virgin and others who expect that she isn’t one.  Throughout the first four seasons, Peggy grows as a person as her career grows.  As she gains confidence in her copywriting, she gains confidence in her relationships.  She becomes more willing to ask for what she wants and draw boundaries where she needs them.  However, she still struggles to find her place.  At one point, she asks to be put on a major new account, and Don yells at her to stop asking for things and earn them instead.  Though she works hard on her accounts to move up, nearly everyone in the office assumes that she got her position by sleeping with Don.

Joan, Betty and Peggy show the different challenges that women faced in the 1960s, no matter how traditional or modern they were.  There were new avenues towards some sort of liberation, but the traditional route was still the most socially acceptable.  Women hadn't reached a stage where it was easy or even possible to have a family and a career; no matter what direction they chose, they ran into problems.  The writers do an effective job of communicating these challenges.  Though many of the women on Mad Men are there to be eye candy, these three allow the viewer to understand and appreciate where women were in society in the 1960s and how much has or has not changed since then.