Places in Ann Arbor I Will Miss When I Leave

This will be the first in an occasional series. In addition to fueling my pre-nostalgia, I’ll be providing a guide to places to visit if you’re ever in Ann Arbor! I’ll admit, I didn’t explore enough in my first two years here, so this won’t exactly be an insider’s guide, but I love this city and hope to share that with you! 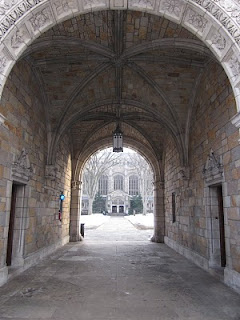 This is hands-down the most beautiful place on campus. Walking through the arches leads to a place that is gorgeous in any season, at any time of day. 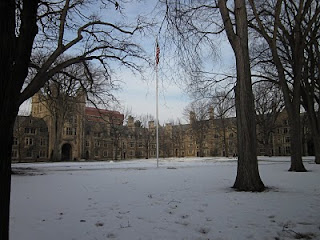 Even in half-melted February weather!

In the fall and spring, I enjoy sitting out in the grass to read. I do have to admit, I’m still too intimidated to study in the Law Library itself, with its rules about silence and cork floors to muffle the sound of footsteps. (I would have uploaded a picture of their reading room, but I'm also too intimidated to run in for the two minutes it would take for a photo.) However, even walking around the Law Quad inspires me to study harder, read more, and just overall work to learn as much as I can. On more than one occasion, I have considered applying to Michigan Law just so I can go to class there. (Don’t worry – I have no plans to be a lawyer. That would likely end in tears.) The Law Quad is also one of my favorite places partially because of the associations I have with it. For one, some of my favorite people attended Michigan Law. On a different note, it is right across the street from Dominick’s.

Oh, Dominick’s. I wish I’d turned 21 even earlier. Last spring after Dominick’s opened (somehow it’s profitable enough to only be open from March to October) I spent wonderful afternoons with friends sitting in the sun on the back patio drinking sangria or Constant Buzz (or the two mixed together – delicious!). Their nachos are also quite good, but damn, that sangria! I look forward to taking my family there at some point, and I wish I could spend the summer in Ann Arbor to have more slow afternoons sitting by their fountain and sipping on something fruity and delicious.

Where are your favorite places in Ann Arbor? Where should I explore in my last couple months? I love hearing suggestions!

Posted by Laura Chanoux at 2:41 PM