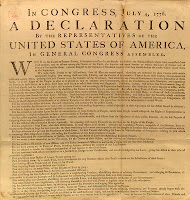 When I tell people I’m majoring in history, I get one of a four reactions.

(d) Ugh, history is so boring.

The first two most common responses aren’t bad. Both teachers and lawyers have respectable careers. I do tend to bristle when people predict my future, though, and tell me I can only go down one of two paths. The third response can be a lot of fun, since it can spark a conversation about what periods of history we both like to study, what parts of the world, cool historical figures, etc.

The last always bothers me. I mean, I wouldn’t major in ecology, but I can recognize that other people think it’s fascinating. More to the point, it doesn’t matter if I think ecology is interesting as long as whoever is studying it enjoys it. So to those people who assure me that they hated history in high school: that's great – I didn’t.

I once had a woman explain to me how her deadbeat ex-boyfriend was going to go back to college to get a degree in history, and she made fun of him for wasting his time on something that was both pointless and wouldn’t get him a job. I wasn’t really sure how to react, aside from to say, “Yeah… I’m not sure what I’ll do. We’ll see when I graduate.” Clearly it was both a helpful and inspirational conversation.

So why study history? Often, I find people get put off because they think the subject is just about memorizing dates. While this is important for context, history is ultimately about people. What motivates people? Is there a difference between what they said and how they acted? What sparked certain movements? How does culture reflect the politics of the time? I find people fascinating and my classes have given me a wonderful way to study them. It’s also necessary to understand history – without the context that it provides, it is difficult to gain a thorough understanding of modern problems.

Also, history courses in college can be fantastic. I've had some great professors, and I love learning new information. In addition to learning about significant events, figures, and changes, I get to learn random historical facts. For instance, here is the most recent cool thing I learned: During the Vietnam War, President Nixon used a “Madman Strategy”to try to get North Vietnam to stop fighting. This strategy essentially consisted of trying to convince the North

Vietnamese leaders that Nixon was crazy, uncontrollable, and had his finger on the button to drop an atomic bomb on them at any moment. He thought if they believed him to be psychotic enough and nuclear war to be a real enough threat, they’d back down and he could win the war. It was unsuccessful, but no less interesting. I mean, seriously, who thinks of that? Maybe you don’t find that as interesting as I do, but hopefully you will at least refrain from making fun of my nerdiness.

This past Wednesday I visited the New York Historical Society and had the opportunity to see some incredible documents they have. Among them was a letter from Alabama Governor George Wallace to a woman in Michigan about segregation in the south, or rather, explaining why segregation was not a problem in the south. Another was a draft of Abraham Lincoln's "A House Divided" speech. I love looking at these documents, imagining the creators, and thinking about what they meant to people at the time. The Clements Library at the University of Michigan has an amazing collection as well. (It's also a beautiful building.) My freshman year, I wrote a paper about the 1840 presidential election and got to examine campaign pamphlets from the time. Isn't that cool? Somebody from 1840 read and took seriously the papers that were in front of me in that library. Amazing.

I might still be unclear on my ultimate career path, but no matter what I am happy with my decision to study American history. History majors do a lot of different things, not all directly related to their studies, so I’m not too worried yet. I’ll let you know how it turns out!

Do you love history? Do you have favorite random historical facts? Or maybe you'd prefer to explain why another subject is more interesting - let me know!

Posted by Laura Chanoux at 8:42 PM