I was joking with a friend recently that someday I'll be like Oprah and give out my favorite things to everyone I know. Since I do love gift guides this time of year, here is a year-end/I-didn't-get-it-together-before-the-holidays/maybe-you've-given-a-bunch-of-gifts-and-now-you-want-a-treat guide to some of my favorite things from 2014. 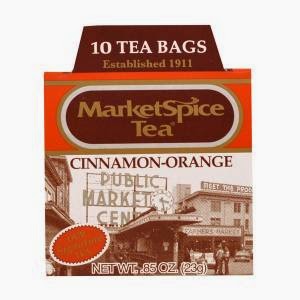 MarketSpice Cinnamon-Orange Tea
My aunt and uncle in Seattle gave us this tea as a wedding gift this May, and it has become my absolute favorite. This tea has a great, bright flavor that has been perfect on chilly days (like today, as I write). I will definitely be ordering more when I run out!

Clancy's Fancy Hot Sauce
Made in Ann Arbor, this hot sauce is flavorful without being overwhelming. Eric and I tried it at Zingerman's one afternoon and bought a bottle immediately. It goes well on just about everything and is now a staple in our pantry.


Cabin Pressure by John Finnemore for BBC Radio 4
Cabin Pressure is a radio show that follows Carolyn Knapp-Shappey, who won a small jet in her divorce and started a charter airline (or air dot, because you cannot put one plane in a line). She has two pilots (one voiced by Benedict Cumberbatch) and her not-so-bright son is the flight attendant. Some friends introduced us to the show, and we downloaded the first series before a road trip to Ann Arbor. By the time we arrived, I was in the process of downloading the next three. It's fantastic.


A Pie for All Seasons by Tristan Hogg and Jon Simon
Eric and I went to Pieminister, a pie chain in the United Kingdom, frequently when we were in Oxford. Very, very frequently. We went through multiple "buy 10 pies get one free" cards. Pieminister put out a cookbook of pie recipes, some from their regular menu, but many new. Eric and I got it this fall and have loved the pies we've cooked so far. To be fair, we've only tried a few recipes, but they've been so good that we just keep making them. The sausage and cider pie is always a good idea.

The Doomsday Book by Connie Willis
Published in 1992, friends loaned us this book recently. Set in Oxford (so of course I was going to love it) in 2054, Kivrin is one of the university's historians who study the past by traveling back in time. She is intent on visiting the Middle Ages, which terrifies her mentor, Mr. Dunworthy. She gets sent back to 1320, but while she's away an epidemic breaks out in Oxford and prevents Mr. Dunworthy from confirming her location in time. The story alternates between the two eras and includes transcripts of Kivrin's recorded memos of what she sees. The Doomsday Book was absorbing and struck an emotional note that I didn't expect.

The Everyday Wok Cookbook by Lorna Yee
Last Christmas, my mom and my sister coordinated their gift giving and gave me a wok (from Mom and Dad) and a cookbook (from Becky.) Written by a food columnist in Seattle, the cookbook offers Asian recipes and Western-style foods and it quickly gave us some of our favorite meals. From chorizo hash to kung pao chicken to beef stew, it's made for a delicious 2014.

Cinnamon Vanilla Chai sugar scrub from Aubrey E. Apothecary
This Etsy shop has been a great gift resource over the past couple years, and this winter I bought myself some of the best smelling body scrub I've ever found. I had to actively remind myself not to eat it.

Happy new year! What are some of your favorite things from 2014?