Eric and I decided that we didn't want to leave Indonesia without hiking one of the country's many volcanoes.  After looking into a few near Bali and being stopped by three-day hikes, 36-hour ferry rides and other travel-related issues that would delay our return to Thailand, we decided to fly to Java and make our way to Mount Bromo.  The others would certainly be worth the effort, but maybe on a different journey.  (We're already brainstorming a south Pacific trip for the future.  There's so much to see!)

After some confusion at the airport in Bali (turns out if your flight is delayed, they don't bother to put it on the departures board), we flew into Surabaya.  The next morning we caught a public bus to Probolinggo, a town two hours closer to Mount Bromo.  We settled into our seats on the air conditioned bus to find that while the bus sat in the station, hawkers would stroll up and down the aisles offering snacks, newspapers, head scratchers, atlases and other goods for purchase.  As one man walked past us selling a whirling noisy toy of some kind, I muttered to Eric, "If anyone on this bus buys that I will break it."  Of course, the man behind us bought one for his kid.  Probably serves me right.

In Probolinggo, we were the first two people to arrive at the public buses to Bromo and the driver explained that they would leave once fifteen people had showed up asking for a ride.  We got ourselves an early dinner and settled in for the wait.  Two and a half hours later, we finally hit the road.

A windy hour and a half later, we made it to the base town.  The village was spread out along the road leading to the national park, each house casting some dim light onto the dark street.  Hawkers kept appearing out of the shadows offering knitted hats and scarves for sale.  After checking at several of the hotels and guesthouses, we found ourselves at a homestay.  Insulated housing didn't seem to be a big thing in this mountain town.  Even with two fleece blankets, I considered sleeping in all my clothes.

At what Eric considered an ungodly hour the next morning (10 AM) we rose to hike a volcano.  The town was much more inviting in the daylight when I could see the green of the mountains around us.  To get to the volcanoes, we hiked down a steep slope and across a wide, flat valley.  Many people take Jeeps or motorbikes to the base of the volcanoes, so we had the plain of sand and ash mostly to ourselves. 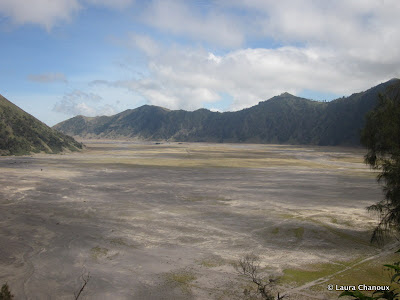 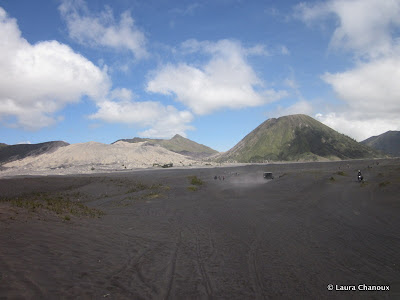 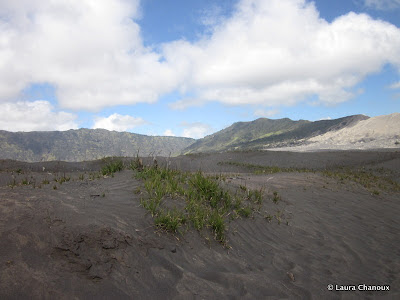 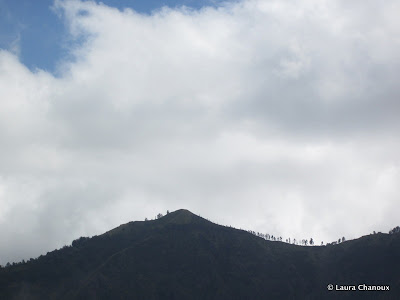 You can't hike Mount Bromo, but you can hike Mount Penanjakan, the light-colored sandy lump next to it.  As we reached its base, men on horses offered us rides up the mountain for between $2 and $6.  We said no, thanks, and started up on our own.  They followed behind us and hovered every time I paused to catch my breath or wipe dust out of my eyes.  I could almost hear them thinking, "Lady, stop kidding yourself.  Clearly you are a mess."  I avoided eye contact and tromped forward.

On an unrelated side note, three of my siblings recently completed a 150-mile bike ride to raise money for MS research.  Two of my sisters run triathlons; one is aslo running a half-marathon in September.  I get pitying looks from men on horseback while I try to walk up an incline.  Anyways, back to the story.

After the steep, sandy slope, we reached the bottom of the stairs that led to the summit.  Stairs! I thought.  Stairs are easy.  The solid surfaces would be a relief after the soft sand we'd been trudging through.  As we started up, however, it was clear that winds had blown sand over the stairs to the point that, had you not known they were stairs, you would have been hard-pressed to guess.

Upon reaching the edge of the crater, Eric stood triumphant, gazing into the steaming pit of acid. Meanwhile, I dropped to the ground and tried to rinse sand off of my teeth; it was a slightly less dignified expression of accomplishment. 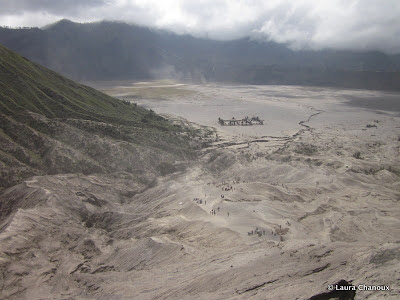 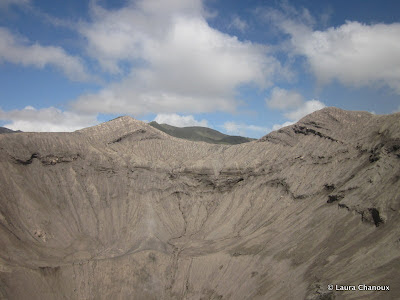 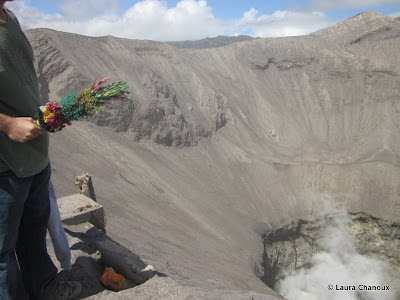 Gravity helped out on our way down.  At the base of the stairs, Eric and I posed for photos with two Indonesian men.  As two of the few dusty white people around, we were interesting enough to feature in their vacation albums.

We walked back across the deserted plain and up the last hill to town.  We planned to grab some mie goreng (delicious fried noodles) for lunch before finding a public bus back to Probolinggo, but as we walked up with our backpacks one was leaving right away.  We handed over our bags to be tied to the top of the van and forced ourselves into the seats with the thirteen other passengers.  After twenty minutes, we still hadn't departed.  We were starting to wonder why when the two men who ran the bus jumped in and drove us up to one of the hotels where ten more people got into the van.  Ten!  People perched on a bench behind the driver's seat, we packed four across in the passengers' seats, and one man sat on a stool right next to the door so it wouldn't close.  The guy who had loaded our bags on the roof spent the entire ride hanging onto the outside of the van, holding the door shut.

I think this is worth emphasizing: we fit twenty-five people into what should be an eleven-passenger van while one man hung off the side for an hour and a half through roads windy enough to cause motion sickness.  I still cannot believe that happened. I also cannot believe that climbing a volcano was not the wildest story of that day.


Do you like to hike? Where are your favorite hiking spots?
Have you ever ended up in weird transit situations?
Posted by Laura Chanoux at 6:57 AM