What I Will Miss in Philadelphia, Part I

Even though I'm very excited to get on the road, there are parts of Philadelphia I'm going to miss.  Here's the first half of the list!

Even though the residential feel of Philadelphia is not my favorite part of the city, I do love the neighborhood I live in.  The streets are lined with two-family houses with wide front porches.  Many people have decorated their porches and front gardens in unusual ways, and before Christmas there were lights everywhere, making the streets sparkle.  The houses make it feel more like a neighborhood than a collection of apartment buildings might, and they also remind me of wandering through residential streets in Ann Arbor.

There are interesting stores and restaurants on Baltimore Avenue, a place that reminds me a lot of Kerrytown in Ann Arbor.  During the summer, they had "Dollar Days," where lots of restaurants gave out sample sizes of their food for a dollar each.  Many people in my neighborhood have Middle Eastern backgrounds, which means there is fantastic food nearby.  More on that in Part II.

Philadelphia has a great appreciation for its place in American history.  Benjamin Franklin and the Liberty Bell are everywhere.  The entire Independence Visitor Center, near the Liberty Bell and Independence Hall itself, is a lovely, well-designed place to learn about Philadelphia during the Revolutionary War.  When I'd come to Philly to visit my sister, my mom and I would explore the historic buildings and then re-watch the documentaries at the visitors center so we could cool down in the air conditioning.

Philadelphia also preserves its more recent history.  Eastern State Penitentiary in the Fairmount area was a working prison until 1970 (though it was declared a National Historic Landmark in the 1960s).  Today it is most recognized for its annual "Terror Behind the Walls" in October, but regular tours are available all year.  I've only been inside for the haunted house (and to be honest I kept my eyes mostly closed) but this past summer I worked across the street from the structure.  It's intimidating in contrast to the otherwise bustling neighborhood.  It's worth visiting if only to contemplate the fact that a place that briefly held Al Capone, saw multiple riots, and experienced a 1945 tunnel escape attempt now calmly sits across the street from a busy coffee house called Mugshots.

According to one of my former coworkers, the park where Will Smith filmed the opening to "Fresh Prince of Bel Air" is in that neighborhood, too, so there's another reason to check out Eastern State Pen and the Fairmount area.

The 46th Street Stop on the Market-Frankfort Line

I have many problems with the Philadelphia subway system but I do love the stop where I catch the train to work in the morning.  It's an elevated station next to a park and a gorgeous old building.  I've done a little research online and it might be a rehab center or a state building — I still haven't had a chance to explore and confirm one way or another.  My favorite part is watching the weather vane on top of its dome every morning.  It made waiting for the train a little brighter. 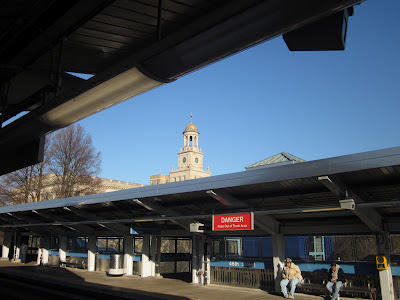 That said, if you ever want to me to explain why I love the MBTA more than SEPTA, I will happily detail my reasons.

Every city has its bookstores, but each place is different.  You can find big Barnes and Nobles in Center City and up by Penn, but there are also quite a few small independent stores and great used book stores around Philadelphia.  There are two used bookstores in particular that I will miss.  At the Book Corner near the Central Library and Ben Franklin Parkway, all proceeds go to funding the Philadelphia Free Library, and prices range from $1-$3.  I've talked myself into more $2 paperbacks than I should have in the past year.  The Last Word Bookshop on 40th Street is right off of Penn's campus and is close enough to my apartment that I drop by at least weekly.  I always seem to find something new.  I could get lost in bookstores for entire days, and Philadelphia has given me more than enough options to last me a year.

Philadelphia has many great parks and open spaces to relax.  Rittenhouse Square was my favorite, partially for its beauty, partially for its proximity to great restaurants and shops, and partially because it is the place to be if you are a puppy.  I spent many happy summer afternoons reading a book on one of the park's many benches and watching small fluffy creatures trot by and make friends.

Keep an eye out for Part II of this series, which is about one of my favorite things: food!  Yes, the food in Philly is so good it couldn't be squeezed into this post.


What are your favorite places in Philadelphia?
What about in your city?
Posted by Laura Chanoux at 11:59 AM