Last weekend I fell in love with New York City.  I'd been to the city a few times before and had always had a great time.  My previous trips had been brief with specific events planned: Broadway shows, a tour of Ellis Island, a visit to the New York Historical Society.  This weekend was for a wedding, but on Sunday I found myself with a few hours with nothing planned.  After dropping off my duffel bag at the hotel and praying I could check in with enough time to primp before the wedding started I began carefully finding my way around the neighborhood.

Our hotel was in Chinatown near Little Italy (on Broome Street and Bowery).  I set out in search of breakfast and coffee, hoping I could find somewhere to sit and read for the three hours I had before I could actually check into my room.  At first I was disoriented, seeming to find only small markets and stores that sold lighting equipment.  I was tempted to sit down and eat cannoli at the first Italian café I found.  I kept going, reached Lafayette Street and saw this: 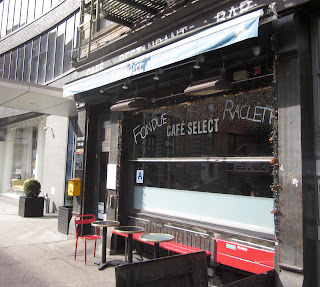 Raclette is a melted cheese dish served in the Alps.  My friend Hope introduced me to it when she was home on break from her junior year in Grenoble, France, and had just gotten a raclette maker (melter?).  It made me smile to see this place and think of Hope and France.  A few minutes later, I stumbled onto this street: 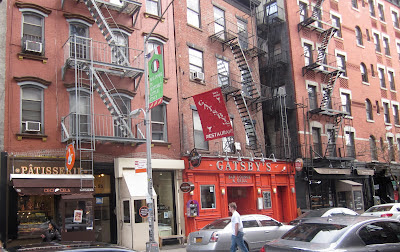 A patisserie, a chocolate shop, and a creperie?  Little France, right here!  I stopped at the patisserie to get a mini chocolate croissant and a café mocha, then began weaving my way around the blocks, making sure I always knew where I was in relation to my hotel.  I sipped the chocolatey drink and devoured my croissant while window shopping.  The area was full of small stores with pretty displays and unique storefronts.  One clothing store had a bubble machine next to its front door.  Another boutique decorated its window with hanging pocket watches.  Here are a few spots that caught my eye:

My other trips to New York had felt fast and crowd-filled, but that Sunday morning I got to enjoy finding my way through a relatively calm neighborhood while people walked their small dogs and others lined up outside restaurants for brunch.  Monday afternoon before Eric and I caught our bus back to Philadelphia (but after I took him to the patisserie), we found a fantastic bookstore nearby.  I could have spent hours browsing.  Between books, pastries, and eye-catching stores it was everything I love in a neighborhood.  For the first time I could picture living in the city, walking my future puppies and window shopping.


How do you like New York City?
What other cities have you fallen in love with?
Posted by Laura Chanoux at 10:59 AM