I Want to Be Tina Fey

When I was in seventh grade, I began watching Saturday Night Live. It was a big deal that my parents allowed me to stay up so late and I felt extremely grown up and sophisticated. One of my favorite parts of each episode was Weekend Update, hosted by Tina Fey and Jimmy Fallon. Once I realized that Tina Fey was SNL’s head writer, I had a new goal in life: Be Tina Fey. 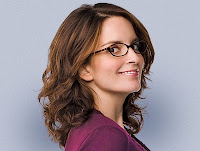 I worked with my friend Hope to accomplish my goal. Together, we wrote our own sketch comedy show: Saturday Afternoon Prerecorded. (We were so clever.) SNL comedian Rachel Dratch was from Lexington like us, and Amy Poehler was from neighboring Burlington. We were from a core of future SNL stars! We were clearly destined for greatness. Looking back now, I am still proud of some of our sketches. One was about Looming Finals, which would follow you as you studied yelling, “Looooom! Rhymes with Doom! You will be Dooooom…ed!” Not too shabby for seventh graders. Another favorite was one of Hope’s, about James Bond’s illegitimate child who goes to therapy to try to work out his daddy issues only to discover that his therapist was one of Bond’s conquests. We also attempted to write a Weekend Update segment, though that mostly focused on the Lexington Minuteman Police Log. It seems every week, a “group of youths” is seen cavorting around town and wreaking havoc on skateboards. As you can see, my hometown is a hotbed of crime and excitement.

I dreamed of filming an episode of our show and sending it to Studio 8H in Rockefeller Center. Tina Fey would eventually find it, realize how hilarious and brilliant I was, contact me to ask if she could use the ideas Hope and I came up with for the show, and eventually, once I was legally old enough to work, ask me to move to New York City to be her personal assistant/co-writer.

Sadly, Hope and I never got around to filming Saturday Afternoon Prerecorded (which has a really terrible acronym, looking back on it). During high school, I started wanting to be David Sedaris as well as Tina Fey, but I also realized that I am not nearly as funny as I thought I was in seventh grade. I wrote a college admissions essay about how I had wanted to be Tina Fey but recognized that it was impossible, so planned to major in English or History. (Though I thought this would set me out from the crowd, I now think that the admissions officer must have been sad that I had given up on my dreams at age 18 and that is why I got waitlisted at that school.)

In 2006, Tina Fey launched her own show, 30 Rock, of which I am now a devoted fan. Between that and Amy Poehler’s Parks and Recreation, I am reminded each week of my seventh grade goal. Now, as I am about to graduate from U of M with a degree in history and not sketch comedy or even creative writing, I recognize that I am probably not going to be Tina Fey. However, being reconnected with my goals is definitely a good thing. While I might not be the head writer on SNL, at least I know that I want to work to do something creative. Maybe it will creative and clever enough that Tina Fey will eventually call me… We’ll see!

Who did you want to be when you grew up? Let me know!

Posted by Laura Chanoux at 1:34 PM